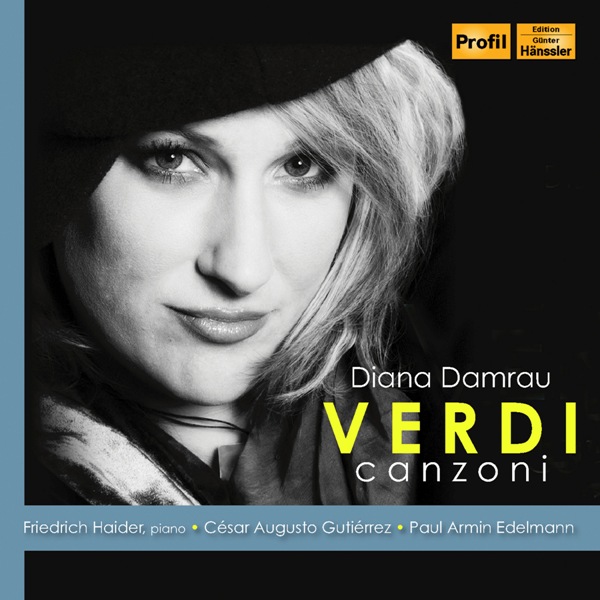 When Diana Damrau is on form, there is no soprano in the world who can touch her, but unfortunately, in recent years, a pronounced flutter has crept into her voice which borders on wobble. These recordings, made in 2005 and 2010, come from her pre-wobble period and thus are utterly delightful from start to finish.

Up until now, my favorite collection of the Verdi songs was the DG Eloquence CD sung by the late Margaret Price. Only 15 songs were on that disc, however, not 17, and one of them—the Ave Maria—is not present here. Price, as I’m sure most people remember, had a creamy soprano voice, almost plumy in tone. That was its chief glory, that plus her superb musicianship. But let me tell you, for the most part Diana Damrau leaves her in the dust. Damrau attacks these songs—sung in much higher keys, more like a soubrette-coloratura than like a lyric soprano. Maybe this is the sort of thing that took a toll on her voice down the road. But here, on this recital, you forget about the decline and revel in the glory of the voice, including all those fabulous trills. My God, Damrau had it all: a voice, fire, technique to burn and intense interpretation. Except for the somewhat careful-sounding Italian pronunciation, you could easily fool someone into thinking this was a Latin soprano (probably Spanish more than Italians, since most Italian sopranos, then as now, are exceptionally lazy and don’t develop a good trill).

Only in Perduta ho la pace did I really miss Price’s creamy sound and perfect legato. Damrau gives the song a dramatic interpretation, including a drop down into her mezzo range, but it’s not quite the same. Margaret Price was sumptuous, seductive, and luscious; Damrau gives these songs the ol’ Marisa Galvany treatment: full force ahead and damn the torpedoes. And if you are willing to sacrifice some of Price’s creaminess, it works wonders on the music and text.

With a few exceptions, Damrau takes these songs at a faster clip than Price: sometimes just a few seconds (Stornello), sometimes nearly a half-minute. And happily, pianist Friedrich Haider is right there with her, you might say her Armen Boyajian (Galvany’s voice teacher and frequent recital partner in the Good Old Days).

But as it turns out, Damrau—whose face and name are quite obviously selling this album—only sing the first five songs! The next six are sung by baritone Paul Armin Edelmann, whose smooth voice is delightful to hear if less intense than Madame Damrau (though he does sing with some dramatic inflection in Nell’orror di notte oscura). Tenor César Augusto Gutiérrez, has a brighter, more “oomphy” voice than Edelmann (but not quite as fine a tone), gets the rest of them. A strange arrangement! When this CD was first issued in 2011, the other two singers (and pianist) had their photos on the cover, but in this new incarnation only Damrau’s photo is on the cover, and her name is twice as large as the others. Looks like a bait-and-switch to me.

So…if you want the Verdi songs sung entirely by a soprano, you still need to get the Price CD, but believe me, those five Damrau songs are simply wonderful. Your choice!