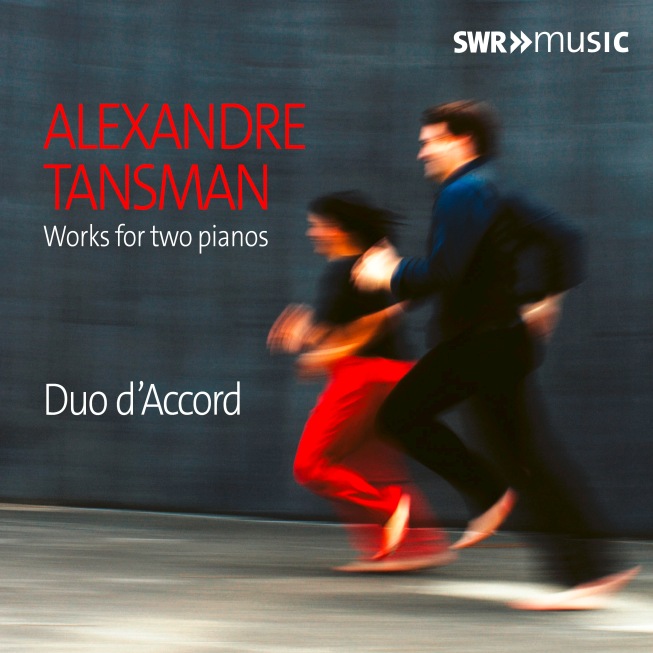 The Polish composer Alexandre Tansman, often considered French or at least cosmopolitan because he lived much of his life in France, was a talented but sometimes uneven composer. I tried to review a CD of his Concertinos, but chose not to because the music was formulaic and uninteresting to me. This is clearly not the case with this disc of duo-piano music, works so imaginative that they almost defy description. Interestingly, his 1951 piece, The Night Train, has a jazz feel about it, which isn’t surprising from the composer of the earlier Transatlantic Suite and other jazz-inflected works of the late 1920s and early ‘30s. Duo d’Accord can’t quite get the jazz feel, playing the syncopations in a more classical vein, but it’s all there in the music if you just tune your ears to it. At 16 minutes long, it has a great deal of development in it, and Tansman wrote contrasting tempos in the various sections of the piece, including a languorous waltz, to add variety. His jazz-classical train toodles down the tracks at its own pace and quirky rhythms, with plenty of harmonic changes and some nifty chromatic passages in it. There’s a nice bluesy passage beginning at 8:25, suggesting a bit of revelry aboard his “bar car.”

The duo-piano sonata is an entirely different animal. It is in stricter classical form but also atmospheric and moody, with a soft, mysterious opening characterized by walking bass lines. This first movement also seems to drift towards the 12-tone style, seldom settling down in any one specific key. The slow second movement relaxes this, allowing tonality to creep in, while the moto perpetuo third movement keeps the pianos a semitone apart as they scamper up and down the keyboard. In the fourth movement, “Allegro deciso,” Tansman opens the proceedings with crush chords and a slow tempo before moving into a bitonal fugue. This is tremendously interesting music.

The Fantasy on Waltzes of Johann Strauss, which I half-expected to dislike, is in fact another wonderfully imaginative piece, combining and contrasting snippets of various Strauss pieces, including the “Duidu” section from the Act II finale of Die Fledermaus. Though clearly designed for entertainment value, it is nonetheless so well constructed that one cannot help but admire it: a far cry from the bombastic piano transcriptions of others’ music by Franz Liszt. Indeed, the music’s charm seems to bring out the very best in Duo d’Accord as they have obvious fun playing with the different variants.

In the music of the ballet suite La Grande Ville from 1935, the ragtime and jazz influence isn’t even subliminal; it’s right out in the open, and here Duo d’Accord does indeed capture the right spirit and swing of the music. Of course, the ballet had to do with a young couple dancing, so this makes perfect sense. Even in the seductive second movement, “Cité ouvrière,” the jazz inflections are evident, though perhaps less so than in the fast outer movements, particularly the Charleston-based third piece, “Dancing.” I was delighted to discover this piece, having unfortunately missed it while writing my book on the intersection of classical music and jazz.

This is a simply wonderful disc, full of interesting music by a composer who walked the tightrope between popular and classical musical styles with imagination and grace. Bravo to Duo d’Accord!