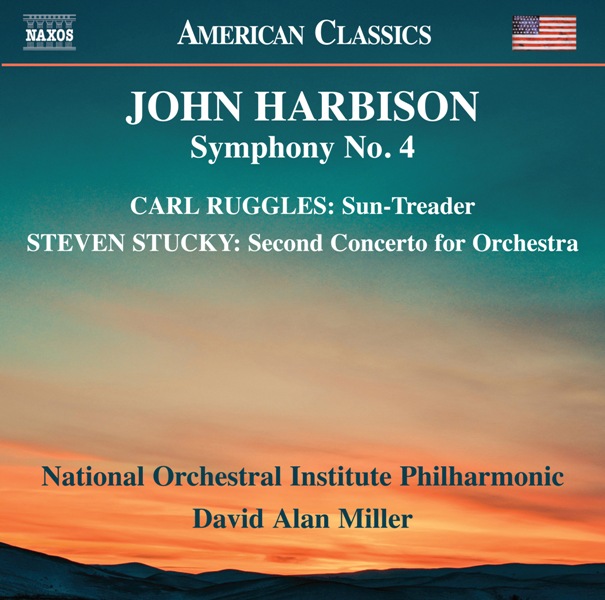 Although John Harbison’s name tops the credits for this CD, it is pretty equally divided between three American composers, Carl Ruggles, Steven Stucky and Harbison. Indeed, it starts out with one of the most difficult pieces in the orchestral repertoire, Ruggles’ Sun-Treader, which the NOI Philharmonic plays with considerable energy and verve. Though it’s hard to beat Michael Tilson Thomas’ classic recording with the Boston Symphony, this version (and the recent issue by Michael Gielen) come close. This recording has a great deal of hall resonance around the orchestra, yet the incisive, biting quality of Ruggles’ orchestration comes through clearly.

I was interested to hear the Stucky concerto, in part because I was unfamiliar with it. It begins with swirling winds, to which biting brass and tympani are added for punctuation. The liner notes indicate that, in this work, Stucky worked out anagrams to pay tribute to the Los Angeles Philharmonic, its conductor Esa-Pekka Salonen, and various musical friends of his, but in all honesty you don’t need to know this in order to appreciate the music, which is colorful and imaginative. A variety of themes criss-cross one another, sometimes in contrasting rhythms, while an undercurrent of repeated triplet figures play beneath them; the music swirls and eddies its way about, yet Stucky maintained complete control of the proceedings, managing to hold everything together in a well-ordered progression despite all the various aural busyness going on. Miller keeps this complex and difficult music under perfect control, producing a performance of great energy as well as musical integrity. The long (13:47) second movement is simply remarkable, turning the swirling figures of the opening into a theme that he develops and re-orchestrates in various ways. There’s a fascinating section in the midst of the movement for the four horns, playing against one another, while the strings and winds play swirling figures. Eventually, the music relaxes and we get a languorous melody played by a solo cello which is then given to the cello section and developed by the winds.

The third movement Finale is almost like an American version of Bartók’s “Game of Pairs” from his famous Concerto for Orchestra. Stucky is clearly enjoying himself, tossing short snippets of themes around and somehow managing to make them stick together. It’s quite a piece, and Miller’s conducting brings out the work’s best features while giving the listener an exhilarating ride.

The Harbison symphony, though a fine work in its own right, is lighter fare than the previous two pieces. This is not to say that it is a “classics lite” trifle—it clearly is not—only that here the pounding rhythms of the opening movement, and Harbison’s use of scurrying themes, seem more designed to impress the listener. Like Stucky, he uses contrasting figures almost repeatedly, but they are more overlaid on each other and less clear in their intent, as if he were trying to overwhelm one with complexity at the expense of expression. He plays with timbre in unusual ways, e.g., the bell tones in the second movement and the sudden pauses in the music, and his language is bitonal in many places, but for me, personally, it wasn’t music that stuck with me (no pun intended). It therefore didn’t surprise me to learn that the symphony was commissioned for the Seattle Symphony’s centennial celebration; many a work written to commemorate a specific event or anniversary tends to be somewhat splashy. But of course Harbison, whose music I generally like, is always a fine craftsman, and if the symphony is lacking somewhat in depth it clearly has dazzle and ingenuity on its side. It’s a bit like listening to Beethoven’s cantata Die Glorrische Augenblick or Verdi’s Hymn of the Nations, a good work but not really a great one. I did, however, enjoy the swinging string writing in the third-movement “Scherzo” with its jazz inflections, generally a Harbison trademark, and in the fourth movement, “Threnody,” he temporarily abandons this style to produce a deeply-felt work that I found moving and impressive. Conductors may wish to program this movement separately; with its haunting theme and superb development, it stands apart from the rest of the symphony because it is so much more than an “effect” piece. The last of the five movements tends to vacillate between genuine expression and lighter, splashier themes. Sorry if I sound negative here, but I have to be honest.

In toto, however, this is an interesting disc, exceedingly well played and conducted. Recommended particularly for the Stucky piece.