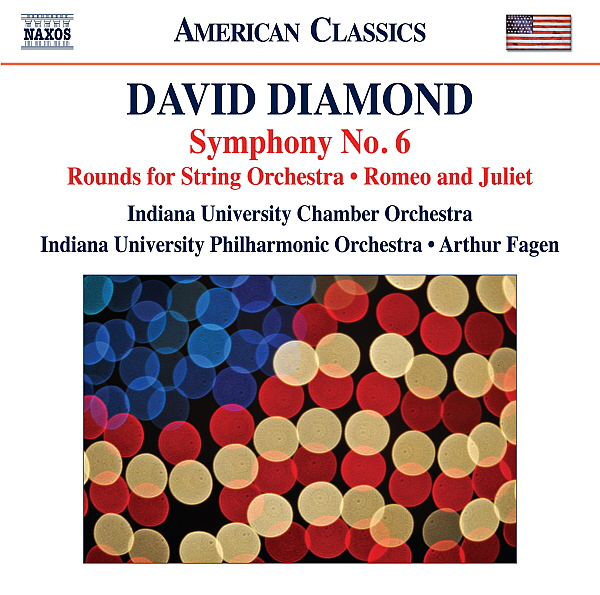 The late David Diamond was a composer who prided himself on being part of the “Americana” scene in classical music while remaining an iconoclast. Even as late as the 1990s, he refused to own a telephone or a fax machine; if you wanted to contact him, you had to go out to his home and visit him in person!

He was also an iconoclast who refused to write music he didn’t feel, and thus composed to satisfy his own muse. Often it worked, sometimes it didn’t, but the three pieces on this new album are all outstanding.

The Rounds for String Orchestra were composed in 1944 at the request of Dimitri Mitropoulos, who wanted something to cheer him up in the midst of those dark, terrible times. Although a light work, it has substance; Aaron Copland loved this piece and one said he wished he had written it himself. But what makes the music work is conductor Arthur Fagen’s strongly-accented, emotionally committed performance. He does not approach the score as light music. He gives it as much attention and drive as if it were a major work, and in so doing brings out all of the music’s strengths while somehow managing to keep it from sounding too lightweight. The frequent counterpoint and imaginative progression of the music are his focus, and in so doing he makes you pay attention to each strand of the piece. The slow second movement is the most American-sounding of the three, also perhaps the most Copland-like, thought there is a certain American feel to the last movement, despite it not being based on any real American tune. 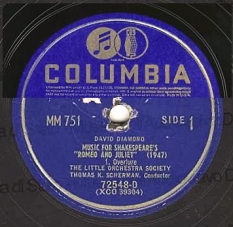 Many years ago, I owned the original 78-rpm set of Diamond’s Music for Shakespeare’s “Romeo and Juliet,” played by The Little Orchestra Society under Thomas K. Scherman (Columbia). I thought it was a pretty good piece. But I was disappointed by Gerard Schwarz’s recording of the same music on Delos…it just didn’t create the same effect for me. Fagen’s performance, on the other hand, is even better than the original Scherman recording: crisp, stylish and full of passion. One thing that helps in its favor is the clear, forward sound. My readers know that I’ve complained in the past about many Naxos recordings, which seem to always want to bathe their orchestras in echo and reverb. This one is quite the opposite, thank goodness, which particularly helps in such soft music as the “Balcony Scene,” where you can actually hear the vibrato of the strings as clearly as if you were sitting in the front row of a concert hall. The tenderness and beauty that Fagen and his Indiana University forces draw out of this music is truly exceptional, and “Juliet and her Nurse” is played with a nice, light touch that does not trivialize the score. “The Death of Romeo and Juliet” is more tender and less dramatic than in others’ music for this play, but Fagen enhances its effectiveness.

Then we come to the Sixth Symphony from 1951-54, of which this is the first-ever recording. This is a powerful, epic work, far greater in both its scope and development than the other pieces on this disc, and it is played here by the full Indiana University Philharmonic rather than just the Chamber Orchestra. To be honest, I was blown away by this piece; it’s a very different David Diamond than I was previously used to, a truly major American symphony with drama and power, and is, again, conducted and played superbly. Yet this score was met by derision from critics when it premiered in New York; Winthrop Sargent, in The New Yorker, called it “possibly the worst composition of its type by a composer of any pretensions to have been heard since the Philharmonic preformed Carlos Chávez’ Third, about a year ago.” I disagree. What apparently set Sargent off was its modernism or, to be more precise, its disregard for music of the past. “Mr. Diamond is either ignorant of the tradition or is perversely and fashionably bent on writing as if it didn’t exist.” Well, yeah, Winthrop, I think that was kind of the whole point. It is, in my view, the most modern of his scores, and still holds up superbly today, particularly as played here. At times openly dramatic, at others quiet but a bit sinister, it pierces the heart like the cry of a wounded bird, yet at the same time is rigorously constructed and well-developed. Kudos to Fagen and the Indiana forces for wanting to play and record this great piece!

This may well be the finest single collection of Diamond’s music, and surely one played by a great interpreter who understands his aesthetic. You need to hear it, particularly the symphony!