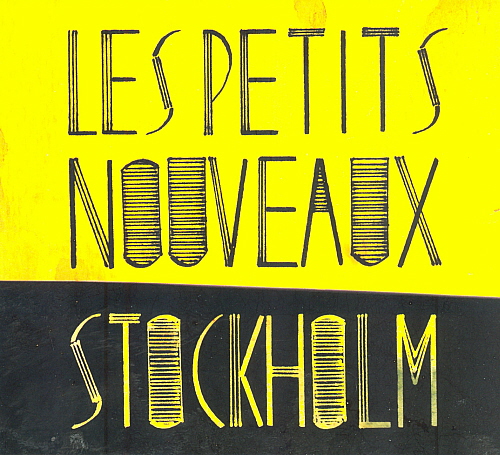 Les Petits Nouveaux, a collaborative jazz group from Canada and Sweden, plays older and original swing tunes in the manner of the old Stéphane Grappelli-Django Reinhardt Hot Club Quintet. I’ve commented several times on the irony of the fact that, up until the 1970s, this style of music was virtually ignored by the general public (but not by musicians) in America, whereas nowadays it is almost omnipresent, even as background music for TV ads. Nevertheless, this does not detract from its attractiveness or its almost limitless scope in enveloping more modern jazz, in part because Reinhardt’s harmonic sense and brilliance of invention on the guitar reached into the future.

The principal difference I hear between Les Petits Nouveaux and such groups as the old Frank Vignola Quintet and modern-day bands Man Overboard and The Faux Frenchmen, is their gentler, less hard approach to swing. Yet there is another difference, and that is their musical imagination. Not only in the solos by guitarist Andy Mac and violinist Aline Homzy, but also in their ability to create new works that fall outside the Hot Club Quintet canon, they reach beyond the “classic” application of this genre to produce music that is not only swinging but inventive. I was particularly struck by Homzy’s composition Catnip, with its tongue-in-cheek pizzicato violin and whimsical turns of phrase, not to mention the addition here of a vibraphone for color. This is clearly not the kind of piece that Django and Stéphane would have played, but it’s wonderful and original.

Apparently the quartet (most of the time, anyway) uses a different second guitarist and bassist when they play in Stockholm than when they play in Toronto, but the effect is the same. Nonetheless, the different members of the group from the two different countries have added their own compositions to the band’s book. Leapsheep is a piece that could easily have been in the original HCQ’s book, as is Andy Mac’s Neptune. Yet they consistently surprise you with their new and novel approach to this repertoire, not only in Catnip but also in Bluie, a slithering sort of piece with unusual changes, including rising and falling chromatics. Homzy makes up for her occasional lack of “oomph” by producing a consistently sweet tone and a nice, relaxed concept of swing, and her solos are consistently interesting and original. Vibist Michael Davidson, who plays on both Homzy originals in this set, gives us a particularly fine solo chorus in the latter. It almost sounds like Grappelli meets Milt Jackson.

The almost startling downward chromatic opening of Stockholm is as good an indication as any of Reinhardt’s musical imagination at work, and the band plays it with wonderful taste and swing. Here, however, the guitar solo is somewhat circumspect in comparison to what Django played on the original recording. Another Hot Club piece, Si tu Savais, is taken at a relaxed ballad tempo and played with great delicacy and charm by the quartet. Note particularly the wonderful string tremolos played by Homzy behind Jim Sexton’s bass solo. The guitar solo is also very fine on this one. (I was led from the posted lineup to believe that Andy Mac is the guitar soloist on all of the tracks, but Tak Arikusi informed me that the two guitarists on each session take turns soloing and playing rhythm, and the soloists are not identified in the album.)

Moving on to the Stockholm sessions, we open things up with Homzy’s King’s Garden, yer another departure from the HCQ tradition, with an almost rock-sounding beat in the introduction and a melody line that sounds a bit like Klezmer. Mac plays interesting rising chords beneath Homzy at one point, and her own playing is absolutely amazing in its invention and technical security. There’s also a surprising, slow-tempo coda at the end. Our Swedish second guitarist, Mikko Hildén, wrote Tango Sobremesa, a lovely piece combining Spanish tradition with Manouche jazz.

Morning Brew is another Mac original, starting out almost like a C&W tune in its rhythm and chording before moving into a gentle, medium-tempo swing. The guitarist doesn’t attempt to emulate Django in this one, but he doesn’t have to; what he plays is delightful and original in its simpler way. This is his showcase, and very fine it is, too, although Homzy also comes in for a nice, relaxed chorus of her own. Her own composition Brz follows with its finger-snapping beat and simple, catchy tune, and her violin dominates the solo space.

Mac’s Blue Jasmine is up next, a slow, moody piece with a quasi-Latin rhythm. The performance, and solos, are very laid-back. We close out the album with Hildén’s Dépaysement, which starts out very quietly with relaxed solo guitar before moving into the melody. Then the tempo picks up (hooray!) as rhythm guitarist Hildén plays some nice double-time chords with a particularly fine guitar solo. We suddenly get a half-chorus in 3/4 time before moving back to 4 as Homzy solos. The finale is particularly interesting with its rolling triplets. Overall, then, a very fine album, though I wish they hadn’t played so many slow numbers in the second set.