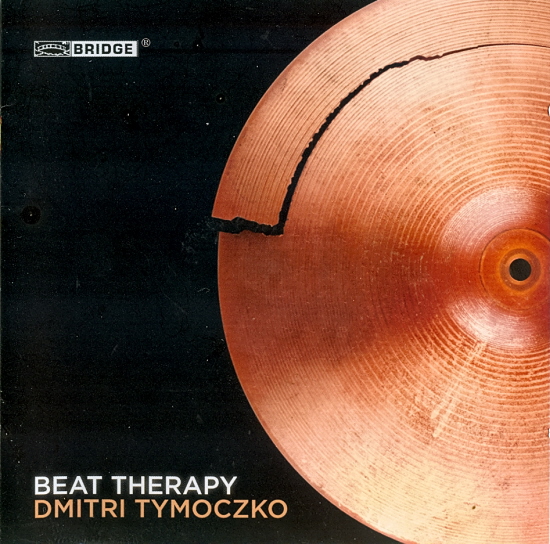 Having given a rave review to Dmitri Tymoczko’s CD Rube Goldberg Variations, I was interested in hearing his earlier music, and Beat Therapy is the earliest issued by Bridge. And what an album it is!

The opener, Loop and Swing, opens with a syncopated drum figure, over which the trumpet and saxes enter, playing what sound like disconnected notes. The music then develops through what Tymoczko calls “a Stravinskian climax” before moving into a jazz-rock sort of beat. But the music is just so complex and so interesting that you can almost ignore the rock influence (thank God!) and enjoy what is going on. The opening notes return in a different key as the music again builds up to an exuberant climax. And despite what sounds like improvisation, this piece is completely written out. Having recently reviewed a jazz CD by Dave Tull (Texting and Driving), on which the trumpet player was Wayne Bergeron, I couldn’t help wondering if our trumpet player here, Thomas Bergeron, is any relation, but I couldn’t find anything online one way or the other.

Kachunk is more of a straightahead swinger (in rhythm, at least) with the kind of quirky, awkward melodic line that might have been written by Rod Levitt back in the early 1960s (and if you’re not familiar with the Rod Levitt Orchestra, you need to check them out). Tyomczko identifies the soloists as Bergeron, tenor saxist Geoff Vidal and Alejandro Aviles, but slyly doesn’t say whether or not they’re improvised. I rather think they are. The beat shifts into double-time, with excellent bass lines (written out?) played by Michael O’Brien under the saxes (playing in solo as well as in tandem, the latter obviously written) while Bergeron plays his own line above them. This is pretty wild stuff!

Katrina Stomp, Tymoczko tells us, “is supposed to be endearingly awkward, juxtaposing dissonant and aimless chords in the keyboards with more straightforward lines in the horns,” later turning darker as he reflected on the hurricane that nearly wiped New Orleans out. But the music doesn’t resemble older New Orleans music; rather, it more closely resembles the Dirty Dozen Brass Band with its quasi-rock-and-zydeco beat. Bergeron is the star here, despite solos by others. The slower, darker music that it morphs into uses some of the earlier material but in an entirely new way, and here it is clarinetist Ken Thompson who has the most striking statement. The music tries to recapture its original upbeat feel, but slips back again into sadness.

Sweet Nothings is in a ballad tempo, built around a fairly simple melody that returns in various forms. This one is filled with solos, probably improvised, by pianist Daniel Kelly, Thompson on bass clarinet, Aviles and Vidal. This is followed by the “haunting and sad” tune, The Mysterious Stranger, with its atonal opening and odd little repeated melody, the trumpet and alto sax being underpinned by the bass clarinet. The tempo then suddenly increases as the band swings; then a return to the slow tempo for the finish.

Earthquake has the players accompanied by computer-generated sound textures, but it’s a slow-moving earthquake, one might say a tremor on Prozac. Here the score is also fully notated, with little eighth-note flutters by the saxes playing in thirds while Bergeron plays solo above them. Another extreme shift to a slower tempo emerges, with the piano playing slow chords beneath the others, playing fluttering figures above it.

Dreams May Come is a sort of jazz-rock ballad, which Tymoczko calls “a lullaby blues.” The music here is relatively simple and straightforward. I didn’t like the rock beat, though; I don’t go to sleep with pounding rock drums floating through my brain.

We end this excursion with Sayonara, which is in a funky groove but a jazz one, but the constantly shifting rhythms and the complexity of the overlaid instruments keep pushing one’s mind away from the persistent drumbeats. As Tymoczko put it, “it works its way into a giant chromatic configuration by the end.” The soloists are Aviles and Vidal, though Bergeron plays some interesting figures above them on trumpet. It ends on a soft, slow chord.

This is, for the most part, extremely interesting music which will appeal to the jazz lover as much as to those who appreciate modern classical directions.