The late Jon Vickers, though considered one of the greatest tenors in the world, made a relatively slim legacy of studio recordings. He left us two versions each of Handel’s Messiah, Verdi’s Otello, Beethoven’s Fidelio and Wagner’s Die Walküre, and one recording each of Aida, Samson et Dalila, Tristan und Isolde, Peter Grimes, Les Troyens and Carmen. In addition, there are professional videos of his Pagliacci, Carmen, Peter Grimes and Otello, the last of these lip-synched to his second (Karajan) recording of the opera. That’s it. The rest of his legacy is relegated to live performances of various, and sometimes dubious, sound quality.

This 1959 Covent Garden performance of Handel’s Samson, one of his greatest roles (and a bit of a signature for him), is one of these, and it has circulated on and off for years on various pirate labels (including Gala, an issue I’ve not heard). This 2012 Andromeda release, boldly advertised as a “new remastering,” is a sonic disaster but an indispensable issue for those who love this magnificent vocal maverick as much as I do.

What Vickers brought to the role was not just his powerful, cannon-sized voice, which defines the Biblical hero far better than most of the wimpy British tenors who have recorded it, but a psychological portrait of the character as well as some incredibly fluid coloratura singing and tender, sensitive moments. In his hands, Samson is no longer a wussy-sounding Baroque bel canto exercise, but a powerful character that will burn itself into your consciousness and stay there. Of course, the HIP crowd will stay far away from this recording, not just because of its dreadful sound but because of its pre-HIP orchestra and chorus, but in all honesty Samson is one of those Handel works, like Rodelinda, that calls for a charged emotional atmosphere in order to make it work. The only other performance of it I’ve heard that comes close is the version in German conducted by Ferenc Fricsay from September 18, 1955, and that one is conducted with a bit more tightness though suffering from all those German consonants, which simply don’t suit the music. Nonetheless, I gave this recording a good review when it was recently issued on Urania because the sound was pretty good and because tenor Ernst Häfliger, one of my favorite singers of the 1950s, gave a performance strongly similar to what Vickers accomplished here.

But if the sound is so bad, why recommend it at all? Because, if you have an audio editor like Audacity or especially Goldwave, you can clean it up by boosting the treble by 12 db and then using light hum removal to clean up the artifact noise. It’s a bit of a chore, but if you’re serious about opera as living drama, you won’t want to live without this performance. 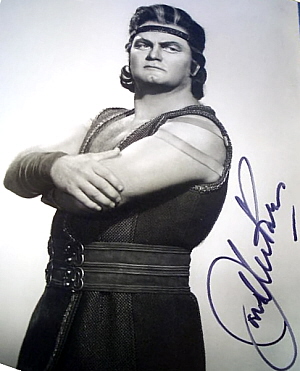 Jon Vickers as Samson in the Saint-Saens version (Metropolitan Opera)

Like the Fricsay, this performance is somewhat abridged (but you get more of the score here than on the Fricsay version), but what you do get is powerful and moving—and it’s not just Vickers. He was lucky to have a pretty good conductor in Raymond Leppard and a generally strong supporting cast. The only questionable voice as such is that of Joseph Rouleau as Manoah. For some reason, he was considered a star at Covent Garden during the late 1950s-early ‘60s, but I never liked his somewhat rough, woolly tone. Nonetheless, he sings with great feeling, and he isn’t as bad here as he was in the 1958 Don Carlo with Vickers and Tito Gobbi, conducted by Guilini. Young Joan Carlyle, as Dalila, has a fresh-sounding voice and sings with some feeling, as does the little-known but rich-voiced contralto Lauris Elms as Micah. James Pease doesn’t have the fluidity of technique in his famous aria, “Honour and arms,” that Peter Dawson displayed, but then again neither does anyone else, and he at least has a firm voice to offer us. Another surprise is the young Joan Sutherland as the Israelite Woman. I say “surprise” because her voice was not only much brighter here than it later became, but she was still enunciating her consonants at this point in her career, a practice she rather gave up by 1963 or so. (The only studio recordings that capture her voice at this point are the Giulini Don Giovanni, her first Lucia di Lammermoor, the Acis and Galatea with Peter Pears, and her blockbuster 2-LP vocal recital, The Art of the Prima Donna, still, to my mind, the best of all her recital albums). I found it amusing that the album cover features a picture of her and not of Vickers.

Some of Leppard’s tempi are a tad slow compared to almost everyone else (including Fricsay), but since the musical concept centers around Vickers’ Samson, which is broadly phrased compared to most other tenors, this doesn’t bother me so much. And this was a staged performance, given as an opera, not a concert performance given as an oratorio.

Which brings us to the real crux of the matter. Would you rather hear Samson played by a smaller orchestra than the one Leppard uses here (which is akin to a chamber orchestra of the 20th century, about 55 musicians with harpsichord), and a chorus that sounds like human beings singing—not to mention solo singers who sound like human beings interpreting the text with depth and feeling—or a 35-piece band of straight-tone whiners and singers who have “appropriate” Handelian voices but far less feeling? I suppose it all depends on what you’re looking for in a performance of Samson. I, for one, prefer humanity in all musical performances. Listening to Vickers sing “Why does the God if Israel sleep?” with its clean runs—an ability he never quite lost, no matter how many Siegmunds and Enées he sang—it’s hard to discount him as inappropriate to the music. My decade of research into the Baroque era and its actual performance practices, as opposed to the artificial ones created by the HIP movement, showed me that critics of the time, such as Pier Francesco Tosi, were always looking for “affective” performances, i.e., ones that touched the heart and brought out the emotions of the characters, not glassy but clean singing, as was also prevalent in that era. And that is certainly what you get in this performance. Only the Israelite Woman, a role that Handel tacked on late in the oratorio’s creation to please the prima donna who he wanted to sing the role (and for whom he wrote “Let the Bright Seraphim” almost as an afterthought), is strictly in the “decorative” style of singing that Tosi described. Everyone else was expected to interpret their roles, no matter how florid the musical line.

So, again, we return to the sound quality as the principal obstacle to this recorded live performance. It’s a shame, to be sure, but considering that this seems to be the only complete Handel Samson that Vickers left us, the ear can adjust once you’ve re-equalized the performance. Therefore I strongly urge you to purchase the album as downloads rather than hard discs and fix it up to your taste. Once you do, despite still-somewhat-defective sound, you’ll have a Samson for the ages.