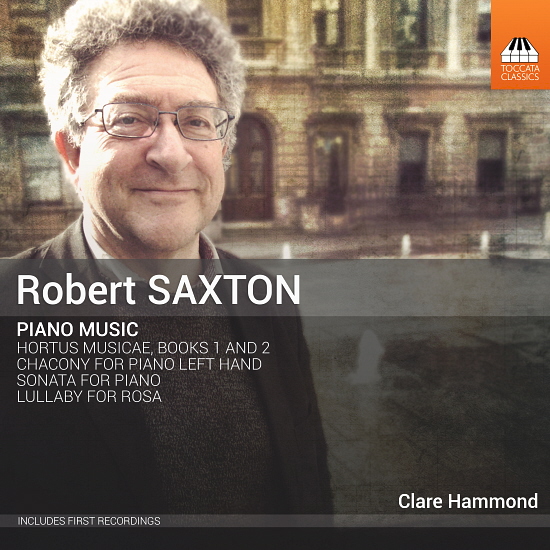 As the back cover inlay of this CD states, British composer Robert Saxton’s music “generates a soundworld somewhere between Takemitsu and Tippett.” If that sounds like a strange combination, it is, but it’s also a fascinating one.

His family background, which he considers important to his “compositional journey,” is eclectic. His paternal grandfather was an Anglo-Jewish amateur singer whose family came from Lithuania and Russia, while his maternal grandfather was a Polish-born Cambridge mathematician. The latter’s cousin, also Polish, was a physicist was one of Albert Einstein’s research assistants at Princeton. His maternal grand-uncle managed the Windmill Theatre in London’s West End while his great-aunt, a photographer for the Suffragette movement, moved to New York where she ran a photo studio on Broadway, taking pictures of the original production of Porgy and Bess and photos of Fred Astaire, Al Jolson, Leonard Bernstein and the Gershwins, among others.

He was also mentored as a composer by the late Benjamin Britten, who rigorously reviewed his work as if developed. I think this may actually be a more important influence, though his own music does not really resemble Britten’s all that closely. He uses bitonal harmonies to launch motor rhythms as well as whatever melodic lines exist; the music thus moves at a pace that, if one removes the strange harmonic base, makes clear sense in an almost neo-Classical or neo-Baroque style. At least, that was the impression I got from the opening Chacony, one of the most challenging pieces I’ve ever heard written for the left hand only. It was commissioned by Oliver Knussen for American pianist Leon Fleischer. Florid cascades of sound fill the air, with occasional bass notes used as a ground. Pianist Clare Hammond is clearly an artist as well as a technician, playing the music with both verve and style.

The 11-minute piano sonata also occupies its own sound world, starting from an opening that includes E, F#, F and B, which sets up the unusual harmonic basis of the work, using the last three notes as a tritone which can baffle the listener trying to find any sort of solid harmonic base. Again, Saxton moves his musical materials around in an unusual way, moving through “varied surface subsections to a dramatic climax.” One of the things I liked most about Saxton’s work here is that, in addition to the purely structural elements, he infuses his work with feeling and emotion—or, at least, that is how Hammond plays it.

The two books that make up the Hortus Musicae or Musical Garden treats, in his mind, the idea of a garden as “a sacred space.” Written for Hammond, it, too, is a complex harmonic work, here built around “pitch centres” for each work. These are first recordings of the suite. At times, such as in the latter part of the second piece, almost sound minimalist in its treatment of a single tone, but for the most past Saxton’s music is dynamic and ever-evolving. Surprisingly, some of the pieces, such as No. 4, “Hortus Infinitatus,” are actually quite lyrical and less harmonically abrasive. The first piece of the second set, “The Flowers appear on the Earth,” begins with mysterious crushed chords and grows through a slow crescendo. No. 3, “The Garden of Changing Perspective,” is a series of chords that are continually altered. “Beech Bank,” surprisingly, channels both Chopin and Haydn.

The CD ends with Lullaby for Rosa, a short piece written for Clare Hammond’s new daughter. It’s quite tonal, in fact a lovely little ballad, played with piquant tenderness by the pianist.

All in all, a fascinating glimpse into the mind of a musical iconoclast.