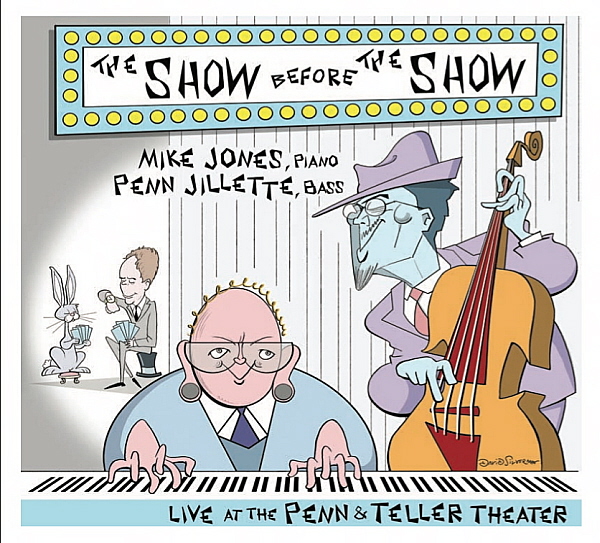 THE SHOW BEFORE THE SHOW / WOODE-McRAE-BIRD: Broadway. JOBIM: Corcovado. G. & I. GERSHWIN: But Not For Me. RODGERS-HART: Have You Met Miss Jones? BONFA-MARLA; Manha de Carnaval. SCHERTZINGER-MERCER: Tangerine. McHUGH-FIELDS: On the Sunny Side of the Street. Exactly Like You. M. JONES: Box Viewing Blues / Mike Jones, pn; Penn Jillette, bs / Capri 74148-2

When I got the promo material and links to this album, and opened up said links, my jaw dropped. No, I didn’t think it was a joke, even though Penn & Teller are the foremost jokesters in the magic business, because if there’s one thing I’ve learned over the years, it is never to underestimate the intelligence of this brilliant duo, but to say I was skeptical that Penn could be this good on the bass is an understatement. The only other experience that compares to it was a couple of years ago when I learned that Louis Farrakhan was a first-rate classical violinist. (And maybe someday I’ll fall for that fake meme going around showing Albert Einstein playing a Telecaster guitar!)

The full story of Penn’s transformation from pretty good electric bass player (which has frets), which he had played in a “mariachi power trio” called Bongos, Bass & Bob, to first-rate acoustic bass player (which doesn’t have frets, and is thus much harder) is given in the liner notes by Teller (who you can see on the left-hand side of the album cover, sitting backstage playing cards with a rabbit). It’s pretty amazing. The short version is that Penn played upright bass as a stand-in for Dick Smothers accompanying his brother Tommy in one number on a TV show in 1998 and kind of liked it. Gary Stockdale, the music director in Vegas, mentioned to him around 2000 that he heard of an upright bass for sale, and Penn took the plunge. A year later, magician-pianist Mike Close heard that Mike Jones was coming to Vegas for a lucrative contract to play with a singer at the Paris Hotel, but somehow the deal fell through and Jones, stranded in Vegas without the promise of any gig, ended up playing dinnertime music at the Eiffel Tower Restaurant. Penn and Close, dining there one night, were blown away by Jones’ playing, and Penn proposed that he play as an opener for the famous duo’s act. Teller loved the idea, and Penn decided that he would learn to be a great bass player, and play jazz, on the fly during performances.

It took him nearly a decade to reach the high level of proficiency you hear on this album, but by golly, he got there. That’s just the kind of man Penn Jillette is. You put your mind to something, you work your ass off, and you get there. No Federal grants. No crying the blues about his rough childhood to gain sympathy. You just DO IT.

And this recording is the solid proof of his achievement.

Yes, it’s what is sometimes not-so-kindly referred to as “straightahead jazz,” but make no mistake, Jones is a superb pianist. His playing reminded me a lot of Jay McShann with some Oscar Peterson tossed in for flavor: not merely virtuosic but musically interesting. Jones composes excellent choruses that follow logically one upon the last, creating a musical continuity not often heard in the playing of so many avant-gardists nowadays. Jillette’s solo on this one sticks close to the melody in the first 8, but then moves out into original territory. While not flashy, his contributions are solid and professional. He creates his own lines and complements the pianist extremely well.

The same goes for Corcovado, although Jillette’s sense of Latin rhythm isn’t quite as loose as Jones’. Yet there’s a nice feeling of camaraderie between the two that comes from their long professional relationship, and Jillette’s “springy” sense of rhythm acts as a nice solid base on which Jones can play unfettered. There are also nice little touches in the bass solo here that indicates how well Jillette has learned the instrument’s strengths. Although the set is live, there are no recording dates given in the booklet for these performances.

But Not For Me is taken at a brisk clip, as are the previous two tracks, and here Jillette shows his mettle with some really fine breaks while Jones just keeps on his own high level. In Have You Met Miss Jones?, Jones really takes off on some fantastic roulades, adding some crushed blue notes here and there while the bassist keeps the motor going behind him. No, he’s not going to make you forget how good Charles Mingus or Eddie Gomez were, but he’s as good as any club bassist I’ve heard, and that’s saying quite a bit considering his full-time gig.

And so the set goes. I think what impressed me more than anything is the fact that Jones doesn’t hold back on his musical imagination to “help” Jillette along. He gives you his best, and Penn is, at this point, always there with the right feel and occasional surprises of his own. One thing that surprised me was the consistently brisk tempos; I’m not sure that Jones or Jillette really enjoy ballads. Personally, I don’t blame them; I’m not crazy about too many ballads in a set myself; but one or two medium-slow blues (and maybe a fast bebop number) would have been nice for contrast. Jones really flies on Manha de Carnaval, and the tempo on Tangerine isn’t quite as up as the previous tracks. On the Sunny Side of the Street is even more relaxed, showing Jones in a playful mood. Jones’ original, Box Viewing Blues, is a really uptempo swinger reminiscent of the great stride pianists of the 1940s. In the closer, Exactly Like You, he channels boogie-woogie with his running single-note bass lines—the only time on the album when Jillette doesn’t play. Yet it is the album’s most spectacular track, a fantastic finale that will take your breath away. Jones keeps subtly increasing the tempo until both he and the audience are in a pianistic frenzy. 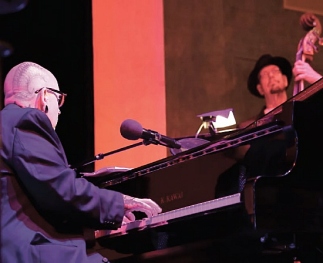 As Jillette has said, “When you ask Jonesy what kind of music we play, he says, ‘Oscar Peterson and Ray Brown.’ When you ask me, I say, ‘Oscar Peterson and…a bass player.’ I wear a hat and a coat, and even though I’m very recognizable, you just don’t expect the pre-show bass player to be someone important. I’m not lit, and people don’t notice me…[but] I get to play professionally, not need the money and play with the best person in the world. Beat that!”

You’ll notice him here, though.