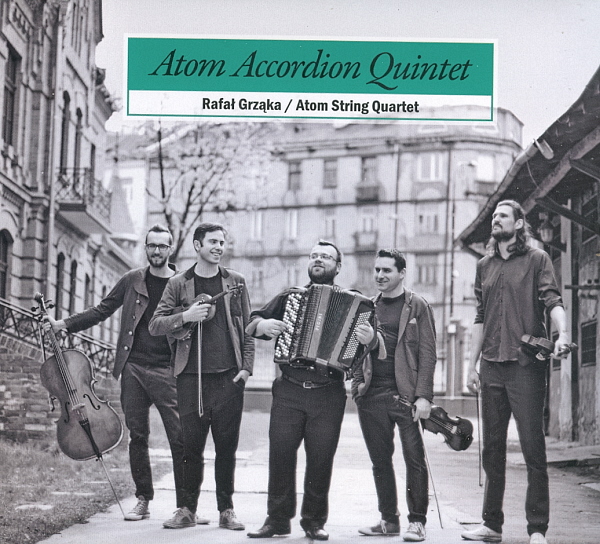 Here’s something new and different from the Atom String Quartet, a 2016 album of through-composed pieces by four composers of whom I was previously unaware. They are Mikołaj Majkusiak (b. 1983), Piotr Wróbel (b. 1977), Krzystof Lenczowski (b. 1986) and Mikola Kołodziejcyk (b. 1986).

The opener, up2U, starts out with an almost Mission: Impossible sort of theme and rhythm (5/4). The ostinato quality continues as the five musicians play around it in a series of variations. Then the whole thing slows down to a strange series of held chords with the various string players each taking turns doing a series of portamento slides. This leads to a series of fluttering figures, during which the tempo increases again as the piece moves towards its finish.

Wróbel’s Suita begins in a lyrical, almost melancholy vein, sounding as if it were based on a folk song. This leads to a slow, sad cello theme, around which the other instruments make comment. Then, suddenly, we get a fascinating but quirky bass line as the music moves more towards a jazz rhythm, which of course the quintet plays with perfect style and understanding. There’s a fascinating solo played by one of the upper strings, possibly improvised, before the score moves towards a series of strange chorded figures played in strict rhythm, then another lyrical section, this time more like modern classical music and less like folk. The accordion plays a loping figure which leads into the strings playing syncopated figures and portamento slides. There’s a hot violin solo, possibly by Mateusz Smoczyński, before we return to the slides and a recap of the theme, followed by a rhythmic section and, later, solos (improvised?) by Grząka on the accordion and Michal Zaborski on viola. This is really great music by any standard!

Lenczowski, the Atom Quartet’s cellist, titled his piece after the quintet. It is divided into four parts: “Walc” (Waltz), “Moderato,” “Adagio” and “Final.” The Waltz is a strange one, more in 6/8 than 3/4 with its rhythms divided somewhat oddly, while the “Moderato” features an ostinato accordion figure behind the playing of the various members of the group. The music is surprisingly lyrical, almost harking back to an earlier style of music despite its modern bent; this is particularly true in the nostalgic-sounding “Adagio” in G major which, except for jazzy-sounding bent notes in the violin solo, could easily be mistaken for a post-Romantic work. The Finale, despite double-time rhythmic figures by the accordion, is more in a Moderato tempo with a lovely theme in C major albeit with excursions into other keys as it progresses. Here the playing of the soloists clearly show the strong influence of the pioneering Turtle Island String Quartet, which Smoczyński played with for five years.

Kołodziejcyk’s Subliminal Folk Suite is also divided into sections, titled “Odsibka,” “Fajrant” and “Zawijas.” Here we have a perfect fusion of jazz and classical: the syncopations and strong jazz pulse are combined with well-written themes and variants, each section of each piece contrasting with and complementing each other. I’m guessing that the solos here are completely improvised (the notes provide no clue), and by now there is no hiding the fact that Turtle Island is the model. “Fajrant” begins very quietly, with a sustained chord that very gradually swells to a nice mezzo-piano. The slow-moving figures continue apace, followed by “waves” of sound from the strings and accordion, scored in unusual chords. There’s a solo accordion passage (written, I think), after which the string quartet plays in an almost strictly classical vein. The brief (1:59) but edgy finale starts with an almost rock-type beat but is much better developed, with another slow theme played over it for contrast.

This is an outstanding CD that could easily appeal to both jazz and classical lovers, although I suspect that the presence of the accordion and the use of jazz figures will upset the latter camp.