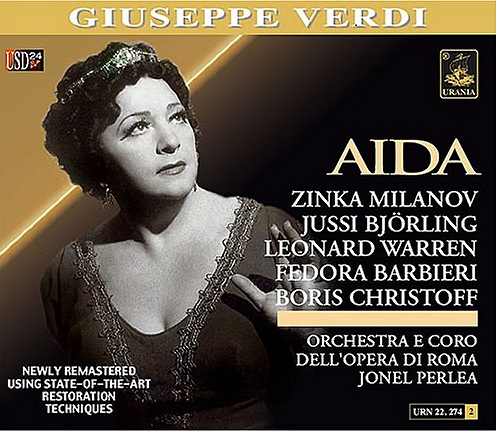 Insofar as Aida goes, it has fared much better on records than almost any of Verdi’s other operas with the exceptions of Don Carlo and Rigoletto—surely much better than Il Trovatore, La Traviata, La Forza del Destino, Otello and Falstaff among Verdi’s other most famous operas. It is certainly not my favorite Verdi opera, occupying fifth or sixth place in my affections, yet I have five recordings of it: three live performances (Metropolitan Opera 1937 with Gina Cigna and Giovanni Martinelli, Toscanini 1949 with Herva Nelli and Richard Tucker and Houston Grand Opera 1987 with Mirella Freni and Placido Domingo) and two studio recordings (La Scala 1928 with Dusolina Giannini and Aureliano Pertile, and this one). This is because of several interesting interpretations by the various famous singers involved, i.e. Giannini and Irene Minghini-Catteneo on the 1928 set, Cigna and Martinelli in 1937, Nelli and Toscanini in 1949 and Freni and conductor Emil Tchakarov in 1987.

One will note that the 1987 performance is the only one I have in stereo. That’s because none of the stereo recordings I’ve ever heard can come close to most of the others. Leontyne Price’s famous 1961 recording suffers from the leaden, lethargic conducting of Georg Solti, who never really came to grips with Verdian style until the 1980s, and Price’s 1970 recording with Domingo is just plain boring, as are most of the other recordings in stereo (Caballe, Aprile Millo, etc.) over the years.

I had this recording in my collection decades ago, on the original RCA Opera Series CD release, but got rid of it because of the boxy, wooden sound, far less clear and reverberant than the original LPs. In 2013 RCA-Sony did a complete remastering job using the original tapes and was able to provide a juicier sound comparable to the LPs, but the solo voices were still (to my ears) a bit too claustrophobic in microphone placement.

This is not so with this 2005 reissue from Urania, which used, as they claim on the album cover, “state-of-the-art restoration techniques.” What they have done with this recording borders on the miraculous. In addition to clarifying the orchestra so much that you can actually hear the “buzz” of the woodwinds and the light vibrato of the strings, they have managed to place the singers in what amounts to a somewhat natural “stage space.” Their voices are still quite clear (except for one soprano-tenor passage in “Sul del Nilo” that is a bit too recessed), yet they also somehow managed to give them “stage movement” within the basically mono sound to simulate stage movement and an almost 3-D effect. This is NOT the same thing as the “artificial stereo” that RCA inflicted on so many of their older mono recordings during the 1960s and early ‘70s, which sounded so horrible that record-buyers dumped them in used record shops almost as soon as they took them home and heard them. This is sound so good that it sounds like modern-day “ambient stereo” recordings.

As to the performance, my sole complaint was always that although Zinka Milanov sang gloriously (this was her last great recording) she did not create a character. But then again, Milanov’s goal onstage never was characterization but only great vocalization. This places her Aida, as a character, behind Giannini, Cigna, Nelli and Freni. She also does not take the final high C in “O patria mia” pianissimo as written, but she does cover her tone and present a sort of mezzo-piano, which is close enough for jazz, as they say. Yet it is still one of the most exceptionally sung Aidas on record, and conductor Perlea was able to curb her bad tendencies towards dragging out phrases and hanging onto high notes until the cows came home.

In fact, Perlea’s conducting is one of the great glories of this set. Although a bit slow in places, he does not drag the music when forward momentum is clearly called for. Overall, it is an exciting performance, and with the new, clearer sound the Rome Opera Orchestra and Chorus never sounded better. Neither did the principal singers. In addition to curbing some of Milanov’s worst tendencies, Perlea also managed to light a fire under the rear end of tenor Jussi Björling, who gives here his finest characterization in a recording studio. He is surprisingly passionate in “Celeste Aida,” the finale of the Nile Scene and other moments, tender and lyrical in the third and fourth-act duets with Milanov. Fedora Barbieri, whose tendencies were to over-dramatize everything to the point of bluster, was likewise reined in by Perlea and gives one of her most musical and interesting performances on record.

But poor Perlea didn’t have much longer to go. In 1956 he conducted the Peters-Björling-Merrill recording of Rigoletto (a fair set but not terribly dramatic…he couldn’t light a fire under Robert Merrill). he suffered a heart attack and stroke in 1957 which left him partially paralyzed. RCA replaced him in their succeeding Rome Opera recordings with the solid but unexciting Erich Leinsdorf (and Arturo Basile in one recording, the Price-Tucker Il Trovatore). Perlea eventually taught himself to conduct using only his left arm, but preferred concerts to opera. He did return to RCA in 1966 for one more recording, the Caballé-Kraus recording of Donizetti’s Lucrezia Borgia, and died in 1970.

Boris Christoff, surely one of the great stage actors of his time, did not do much to characterize with the voice; he usually just sounded snarly, albeit with a beautiful Slavic bass sound. He does so here, but then again, Ramfis is a pretty snarly character anyway. Perlea also didn’t need to do much to coach Leonard Warren, one of the most musical and dramatic baritones of all time. By 1956 Warren’s vibrato had loosened somewhat, meaning that there are a few moments where his dark, sulphurous sound is marred a little by an incipient wobble, but he is surely one of the darkest-sounding and most menacing Amonasros you’ll ever hear. He’d even scare the bejesus out of me.

Thus this Aida is greater than the sum of its parts. Every single passage is sung accurately in terms of note-lengths and rhythm, and Perlea reveals the opera’s structure while not squelching its dramatic effectiveness. Do I prefer Jon Vickers’ Radames to Björling’s, Cigna’s Aida to Milanov’s and Minghini-Catteneo’s Amneris to Barberi’s? Yes, but you can’t have that combination, and what is here is effective, dramatic, and beautifully sung and played. Now that we have great sound to go with it, this is clearly the best studio Aida made after 1950.