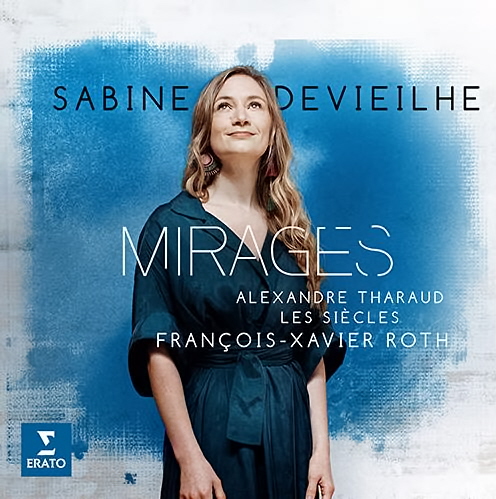 And here we go with yet another coloratura soprano new to me, but unlike Pretty Yende, Sabine Devieilhe has the real goods. She originally studied both the cello and musicology, but once her singing voice was discovered she put the cello aside and studied voice in earnest.

Interestingly, the liner notes indicate that this album came to be from her desire to record the role of Lakmé. Why Erato did not allow her to do so is beyond me, because the three excerpts contained herein reveal her to be possibly the best-suited voice for this role since Mady Mesplé recorded it way back in the 1970s. This is not to say that Devieilhe’s voice is like Mesplé’s because it is not. Where Mesplé was heady and vibrant, Devieilhe has a very smooth tone production, almost creamy, all the way up through her highest notes, but they share an inner enthusiasm for the role that is exactly what is needed to put it over for the public.

But creaminess of tone is not all that Devieilhe has to offer. She also has a fully integrated technique, one in which all the little niceties of coloratura singing—trills, mordents, grace notes and the like—just roll out of her like natural speaking. Like her Australian-born counterpart Danielle de Niese, Devieilhe also has an enthusiasm when singing that is infectious, and this, too, is a necessary ingredient for Lakmé. But I was also very impressed by her ability, very rare even for some of the finest rivals in her voice range, to sustain great breath control, which allows her to go up into the stratosphere without a break for breath. In addition to all this, look who her accompanist is: the great conductor François Xavier Roth, whose recordings of the orchestral repertoire have garnered critical acclaim around the world.

So why didn’t Erato just let her record a complete Lakmé? You got me. I’m stumped. All they needed was a tenor like Spyres or Calleja, a good mezzo (Marianne Crebassa, who sings the flower duet here, is certainly good enough) and bass (perhaps a little rarer, but Nikalantha isn’t that difficult to sing) and boom, we’d have a first-rate Lakmé to treasure forever.

Well, at least we have this recital, and it’s certainly good enough to whet your appetite. Judging from this recital, Devieilhe isn’t quite as detailed an interpreter as de Niese, but de Niese her diction is flawless and, being French, perfectly idiomatic. Interestingly, I also hear in some of her range the kind of sweetness that Mado Robin possessed, and Robin, too, was a first-rate Lakmé (just don’t expect Devieilhe to sing the B above high C, as Robin could).

I have to admit that the 4 Hindu Poems of Maurice Delage were entirely new to me. Delage (1879-1961) was a contemporary of Ravel and Milhaud but neither as impressionistic as the first or as harmonically daring as the second. His music has some of the touches of the Impressionist school but, at least in these songs, more tonal and less amorphic harmonically. Nonetheless, the songs are well written and Devieilhe sings them with creamy ease. Oddly, much the same things can be said of Debussy’s La Romance d’Ariel, a pleasant song but scarcely one of his best or most memorable. Again, Devieilhe sings it beautifully.

Yet perhaps the greatest performance on this disc is her version of the aria from Stravinsky’s Le Rossignol. She sings it better than anyone I’ve ever heard, including Reri Grist on Stravinsky’s own excellent recording of the complete opera—and it is by no means easy. Devieilhe’s unique ability to keep her high range creamy and perfectly centered is exactly what this music needs, and here, for once, it gets it.

I personally questioned the inclusion of the complete “mad scene” from Thomas’ Hamlet, surely one of the most sugary and least dramatic settings of Shakespeare known to mankind. Yes, it’s a vocal showpiece and yes, Devieilhe sings it perfectly, but “Camptown Races” with runs and trills would have had as much musical value (plus, it has “Doo-dahs.” Does Thomas’ music have doo-dahs? Does it?). Ophelia sounds about as “mad” as Katie Couric with a hangnail, and it goes on and on for almost 12 minutes. Not enough time to vaccum the house, but more than is needed to clean the cat’s litter pan. Berlioz’ setting of the Death of Ophelia, also lyrical, is more interesting music although I don’t think much of its dramatic value, either. The duet from Thaïs is slightly better music, and soprano Jodie Devos joins Devieilhe and Crebassa here to give a first-rate performance, helped along by Roth’s lyrical yet taut conducting.

Koechlin’s setting of Le voyage is typical of his genius: melodic but not predictable, the tonal melody set to floating, bitonal piano accompaniment. Along with the arias from Pelléas and Rossignol, it is surely one of the highlights of the album.

We end our journey with yet another Lakmé excerpt, the arietta “Tu m’ai donné le plus doux rave,” which of course is right up Devieilhe’s alley. A beautiful and at times interesting journey, worth exploring with her.