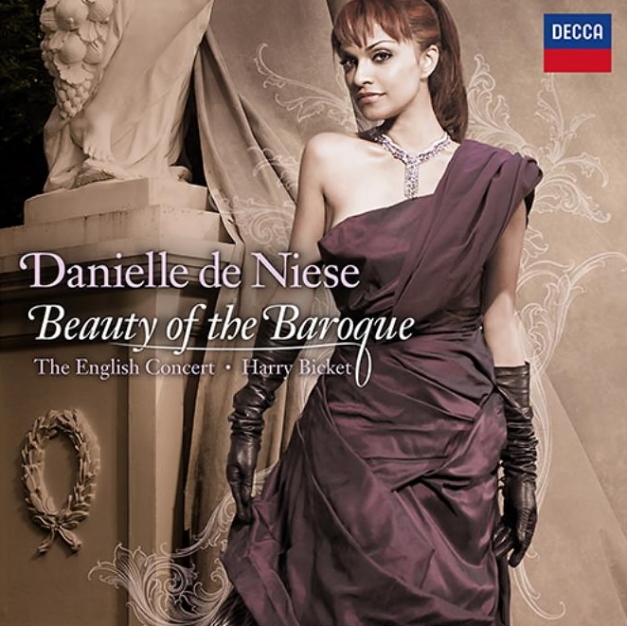 Perusing the new releases in the Naxos Music Library, I was directed towards a recital of coloratura bel canto arias by one Pretty Yende. So I listened to Juliet’s waltz song from Roméo et Juliette, and heard a small, fluttery voice slithering and sliding through the runs, smudging and faking as she went along. I shut it off.

But then, going back to New Releases, I saw a magical name that had deeply impressed me some six years ago: Danielle de Niese. So I clicked on it. WOW, what singing! And better yet, what artistry!

The web page on which the sound files were stored for listening said that this album was released in June of 2011, but this was the first I had seen or heard of it, and this is the first time Naxos has promoted it. This is vocal gold, folks. De Niese has a sweet, vibrant voice, with perfect placement, superb intonation, a flawless technique, excellent diction and, best of all, real interpretive sensibility. Just listen to the opening selection, John Dowland’s Come Again, Sweet Love, and you’ll be hooked. This is as great a performance as you will ever hear in your life. Engaging and perfectly sung from start to finish. My lone complaint is that the lutenist is unidentified on the album’s cover and inlay. I had to go to the English Concert’s website to discover that their principal lute player is American-born William Carter. Since only “English Concert” is credited, I have to assume that he is the player on this CD.

I don’t think it’s much of an exaggeration to say that de Niese’s voice reminds me strongly of Kathleen Battle’s. They don’t sound exactly alike, but close enough that they could be sisters; they’re certainly sisters-in-artistry. Like Battle, de Niese has that kind of crystalline quality that is exceedingly rare, and she is her equal as musician, interpterer and technician. Nor does it hurt that she is accompanied by Harry Bicket, one of the very few Baroque-era conductors who truly understands musical style and conducts with both brio and sensitivity. One of my few disappointments was that her rendition of “Ombra mai fu” from Serse does not include the opening recitative, which for some reason is generally omitted in modern recordings of the aria. But listen to the way de Niese sings the high note, entering with a pure “straight” tone and then slowly adding a touch of vibrato.

Another amazing quality of de Niese’s singing, like Battle’s, is that the vocal timbre is equal and consistent from the bottom to the top of her range. Every note is round and lovely; the oft-feared “break” in the voice does not exist for her because her placement is so well-grounded. Each note is struck like a bell, the pitch flawless. This gives her the luxury of flying through whatever music she sings as if she were sight-reading it, with not a care in the world as to vocal placement. In timbre, her voice sounds like a cross between Battle and Sylvia McNair, but I still insist she is closer to Battle because of the ravishing tonal quality, which has a sound like fresh merlot grapes. There is a slight purple tinge to her sound, but a purple that glistens in the sun.

And if you had any doubts about de Niese’s interpretive qualities, listen to her deeply-felt performance of “When I am laid in earth” from Purcell’s Dido and Aeneas. Why hasn’t Decca recorded a complete performance of this opera with de Niese in the title role? Daniel Behle would make a great partner for her as Aeneas. Come on, Decca, get off your fat rears and do it for us…with Bicket conducting. And maybe Patricia Petibon as the Witch.

From a personal standpoint, I was very happy to see the arias from Acis and Galatea and Rodelinda, surely two of Handel’s best operas, included here. De Niese sings them to perfection; indeed, I can’t recall hearing anyone else sing the former aria as well as she, and Bicket’s conducting is the perfect complement to her finely-detailed performance. Pay close attention, please, to all those little grace notes that she tosses off so insouciantly, as if they were easy. They’re not. They require not only great placement but also flawless breath control. Likewise, her rendition of the final duet from L’Incoronazione di Poppea with Andreas Scholl, one of only two countertenors now singing whose voices I really like (the other is Philippe Jaroussky), is absolutely exquisite, reminding me of my two favorite Poppeas, Carole Bogard and Rachel Yakar.

But I could go on and on about every track on this album because each one is so good. De Niese is an artistic chameleon, shifting not just moods but characters as the text of each song and aria demands. The only piece on here with which I was unfamiliar was “Guardian Angels” from Handel’s The Triumph of Time and Truth, nice but a bit too much like many other Handel arias. Ah, but then we get the wonderful duet from Pergolesi’s Stabat Mater, again with Scholl, and this is so good as to almost make time stand still.

The recital ends with two superb arias from Bach’s secular cantatas, and the one from the Wedding Cantata immediately put me in mind of Battle as this was the first piece I ever heard by her on record (a 1977 performance on RCA Victor with James Levine conducting). Sprightly and engaging, they are among Bach’s most appealing compositions, and de Niese sings them with juicy enthusiasm in her voice.

Bottom line: Danielle de Neise can sing the phone book (if they still make them…I think they do, I just had one delivered to my house) and stir your heart and mind. She’s that good.