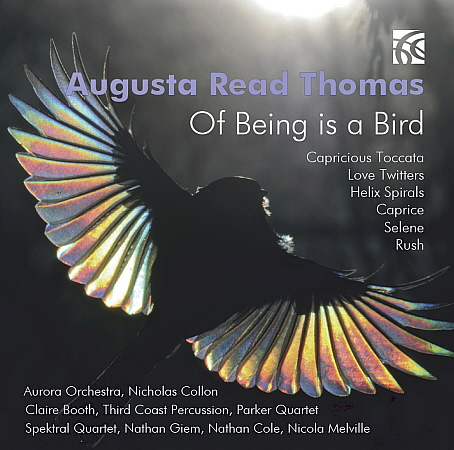 Having been very impressed by Augusta Read Thomas’ CD Ritual Incantations, I decided to peruse some of her other discs and ran across this one. It is much in the same vein: energetic, sparkling and often challenging music.

One of the delights of Helix Spirals is that the first movement is played pizzicato by the entire quartet, an interesting device that other composers have only used for intermittent passages. Here the opposite is true: at about 2:20 one hears a couple of sustained notes (I think by the viola), and only at 3:00 do the two violins switch from pizzicato to sustained bowing for a few passages. The music, largely tonal, is thus broken up in such a way that the listener feels disoriented, even more so when, at about 4:30, sustained notes play against pizzicato that seems to be running backwards rhythmically!

The second movement starts with pointed rhythmic figures being played by the viola, with the cello still in pizzicato mode while the two violins play sustained notes above it. This is then developed by Thomas in an interesting manner, with other instruments (including the cello) taking turns at playing the quirky bowed figures while the others indulge in pizzicato. Then suddenly, the third movement begins with the entire quartet playing sustained music in traditional quartet orchestration in C major. What should sound normal now sounds strange. Eventually the music becomes more animated with eights replacing the whole notes and leaping figures alternated by all four members of the quartet. The interaction becomes denser during the development section, eventually overlapping one another. It’s a strange ending to a strange piece.

The next selection, Selene (Moon Chariot Rituals), combines the marimba and percussion quartet Third Coast Percussion with the Spektral Quartet…you might call it her “strings and things” piece. This is highly syncopated in an almost jazzy way, and I found it a shade disappointing that the musicians involved here didn’t have much feeling for jazz swing, which would have made the performance ideal. It is an almost continuous swirl of syncopated figures, I would surmise dotted eighths and sixteenths, later shifting to mysterious sustained figures. This sort of tempo shifting continues throughout, the music really becoming quite rapid in pace and strongly syncopated at 7:30. At around 10:42, the music becomes slower yet again, but this time new variants are introduced and the mood, too, becomes quite different, as if one had suddenly opened the door to a performance of entirely different music.

Violinist Nathan Giem then attacks Thomas’ Capricious Toccata with vigor and brio. It’s typical Thomas, rhythmic and energetic with sustained notes as interludes. Of Being is a Bird is the most ambitious piece on this CD, an orchestral song cycle based on poems of Emily Dickinson (heck, don’t all women composers eventually set poetry of Emily Dickinson?). The music is bitonal and atmospheric. Soprano Claire Booth has a beautiful voice, but her diction is completely unintelligible. I couldn’t make a single syllable out without following the text. This is the world premiere performance, given at Wigmore Hall in London in July of 2015, yet the recorded sound is as crisp and clear as if it were made in a studio. Great engineering job! There are but two poems set to music, Of Being is a Bird and The most triumphant Bird I ever knew or met, separated by an orchestral interlude in Thomas’ familiar hocket-style writing. The first song is set to slow, atmospheric music while the second is energetic and driving.

Caprice and Rush for solo violin is played by Nathan Rush, who is first associate concertmaster of the Los Angeles Philharmonic (i.e., the third one over from the left). He has your generic fine, bright tone and impeccable bow control you would expect from a musician in that position. The music here alternates between lyrical and serrated figures in Thomas’ normal mode when writing for strings. This collection concludes with Love Twitters, which I personally felt was the least original and communicative piece on the disc. It’s just busy music, energetic but to my ears conveying nothing much.

Nonetheless, most of this album is fascinating music, well played and interpreted by the various performers. Well worth a listen!