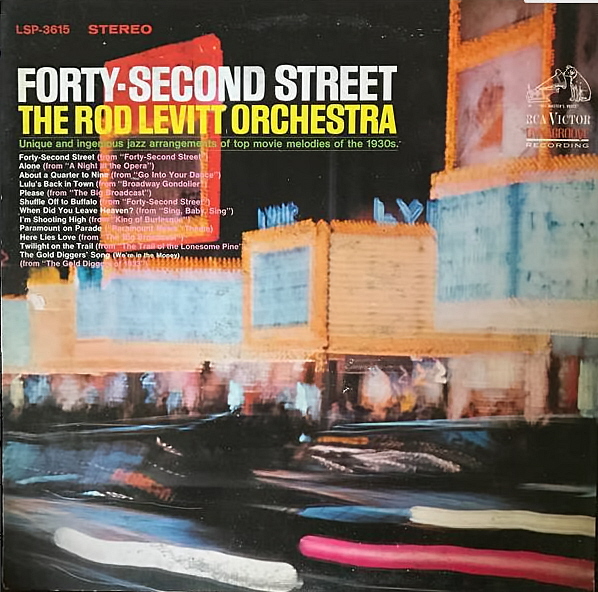 The late trombonist-arranger-composer Rod Levitt (1929-2007) had but four years of fame and success in the music world, 1963-1966, first through the issue of a single album on Riverside (The Dynamic Sound Patterns of the Rod Levitt Orchestra) and then, so he thought, lasting success via a contract with industry giant RCA Victor. But RCA only made three albums with him, Insight (1964), Solid Ground (1965) and Forty-Second Street (1966) before they pulled the plug on him.

The RCA albums did not sell well. The arrangements and compositions were too quirky and eccentric to appeal to the Les & Larry Elgart “businessman’s bounce” crowd but not far out enough to compete with such avant gardists as Ornette Coleman, Sun Ra or Michael Mantler. On the first two albums he wrote and recorded his own material, but for the last of these he wrote updated arrangements of old 1930s pop & movie tunes. The album flopped. End of career.

Several years ago, Insight and Solid Ground came out on a single CD reissue, but neither hide nor hair of Forty-Second Street was to be seen anywhere. Then, just yesterday, I was poking around on Sony Music’s Freegal site, a free and legal music download service provided to large public libraries across the country. On a whim I typed Levitt’s name in, and voila: Solid Ground and Forty-Second Street popped up, available for download or streaming!

Well, of course I was excited to find this, so I immediately started listening and was captivated by the tongue-in-cheek humor and camp of Levitt’s arrangements. That was when I searched the Net to find out when the album was reissued. Surprise, surprise: it came out on RCA/Legacy last October 7 (2016). But it’s not available as a hard copy CD, only as downloads, You can buy the tracks on Amazon or stream them for free at Spotify or Muzoic. For free? Yup. So why spend money on the album? Obviously Sony/RCA doesn’t give a crap. So take this music, please.

And what excellent music it is! All of Levitt’s familiar traits—displaced rhythms, substitute chords whose roots suddenly fall out from under you, overlaid counterpoint and his unique knack of scoring an octet to sound like a full orchestra—are present in this album. And, as a little teaser, here is an excerpt from the original liner notes by Willis Conover:

“Well,” Rod Levitt says, “with a little organization and contrast you can get away with anything”—including a club sandwich of camp and jazz and nostalgia, all three. Camp followers, however, are serious about silliness. Rod, like his brother trombonists Vic Dickenson, Dickie Wells, Bill Harris and Tricky Sam Nanton, is serious about his musicianship; he laughs at the silliness.

Rod is a club sandwich himself. He’s thirty-six—looks five years older in photos, five years younger face to face. His Oregon-bred, gee-whiz boyishness is unusual in New York City, but in New York’s musical rat race Rod runs at least Place or Show. He majored in music at the University of Washington, interned with Dizzy Gillespie’s band in the Middle East, and served the community six and one-half years in the Radio City Music Hall orchestra. Now he is leader, composer, arranger and trombonist with his own eight-man band. He thinks of his octet as a orchestra. He thinks of himself as a salesman.

Though he didn’t compose any of the music in this album, some composers may find more composition in Rod’s arrangements of their songs than they gave the songs originally. Here and there, other bandleaders will catch Rod winking at them.

But what of the music? Well, that exhibits Levitt’s usual mixture of innovative orchestration, in which he made is octet sound like a full orchestra, with inventive writing and tongue-in-cheek humor. A drum roll introduces a purposely corny, ricky-tick rendition (with some beats missing in the bars, and a transposition in the middle) of Shuffle Off to Buffalo, one of five songs (nearly half the album) written by the movies’ star duo, Al Dubin and Harry Warren. Levitt did so much juggling of his three reed players, who between them played 12 instruments(!), that you’d swear this was a full jazz orchestra playing. Part of the illusion was created by trumpeter Bill Berry’s amazingly strong tone, which made him sound like a full section. The album’s title track then follows, the tempo brought way down and anchored in the bass notes of the piano and low reeds. Levitt almost makes it sound like a sinister death march. I don’t think devotees of ‘30s movie music were terribly amused by it. In the midst, Levitt sticks a plunger in his trombone and channels his inner Tricky Sam Nanton, followed by a whimsical and tasteful bass solo.

I’m Shooting High comes next, and here Levitt made no ironic comments or major transformation. It’s played in a straightforward manner as a propulsive swing tune, with Berry and Levitt, playing in unison, injecting an infectious riff on and off as the saxes blister their way through some incendiary solos. It has the feel of some of those sleek late-swing bands like Charlie Barnet’s Skyliner group. Alone, sung by Allan Jones in the Marx Brothers’ classic A Night at the Opera, is played by Levitt on trombone as if by a drunken sailor while flutes are all a-twitter above him and Berry’s muted trumpet fills in the background.

Dick Whiting’s classic When Did You Leave Heaven? also receives a somewhat straight swing treatment, this time with two of the reeds doubling Berry to give the illusion of a full trumpet section. Gene Allen’s baritone solo is tasteful and fitting, but it’s the arrangement, with its rhythmic displacements, that steals the show. Levitt then slows the tempo down yet again and plays plunger-muted through theAl Jolson classic About a Quarter to Nine as the reeds play whimsical figures around him. The piano plays a repeated riff while Beal solos, then continues behind Levitt for the ride-out. Someone yells out “About a quarter to nine!” as the song comes to a close.

More cornball musical treatment greets Lulu’s Back in Town, with more rhythmic displacements, until the tempo is halved to back up a fine Allen solo. (Sorry to be obtuse, but I can’t always tell which of the other two are playing the alto solos.) Flutes and piccolos chirp happily behind him in his second chorus, then in the third he doubles the tempo. Then Levitt and one of the reeds plays a descending lick while the trumpet and other reeds peruse a hip figure, which eventually turns into a ride-out which in turn becomes corny again. Lulu is back, indeed.

Please was one of Bing Crosby’s very early hits during his solo career. Levitt’s a cappella trombone introduces it, after which the key shifts upwards and we get a waltz tempo. Another transposition upward for the band, all four of the other front-line musicians playing in unison. Levitt has fun throwing in a few upward rips, Allen returns on baritone, then the whole band kicks into gear before a fine alto solo (probably by Buzz Renn). Levitt returns to ride the tune out. The Gold Digger’s Song (a.k.a. We’re in the Money) is cause for great exuberation by the band, sending up brightly-colored musical skyrockets. Renn solos on alto with an energetic bass and drum backing, then a rare solo by trumpeter Berry. Levitt slips and slides around on ‘bone while the band continues to sparkle around him, then a ride-out.

Twilight on the Trail is given the old pseudo-Tunisian treatment that was so much in vogue during the ‘30s, but typically of Levitt, the sound texture is bright and not muted or very mysterious despite brief oboe interludes by Marge. The beat then slides into barrelhouse (or as Bing Crosby used to call it, “tempo di bucket”) for the middle portion of the song, with the drums eventually doubling things up just to confuse you before sliding back into Marge’s oboe and the original beat. Weird stuff!

Here Lies Love is a showcase for the leader’s funky trombone, with the rest of the band injecting some spiffy staccato chords behind him and the rhythm section under him. The ‘30s love fest then wraps up with Paramount on Parade, a song that was played in the movies to introduce the “news of the world” to be followed by the Serial of the Week. (Those under the age of 80 probably won’t know what the hell I’m talking about. Look it up.) This, too, becomes a relatively straight, medium-tempo swinger with little Levitt touches of harmony and orchestration, a fine yet quirky ride-out into the sunset.

No two ways about it, if you’re a fan of interesting jazz arrangements, you won’t want to miss this release. A shame you’ll have to burn your own physical CD because Sony-RCA was to cheap to issue it that way.