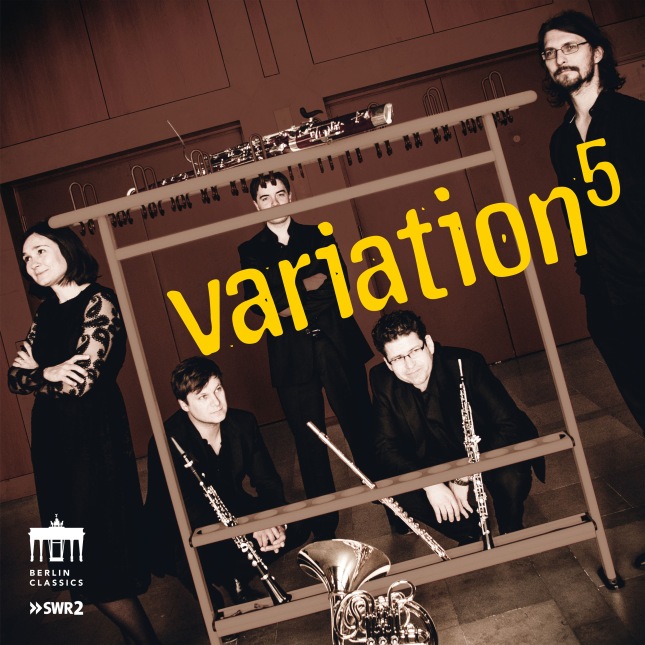 Variation5 is a fairly new wind quintet who’s trying to make a mark for itself with this first CD release. Like so many modern chamber groups, their aesthetic is marked by brisk tempi, a forward press to the rhythm and extreme clarity in sonic texture. To a certain extent, this eliminates such niceties of expression as rubato, rallentando etc., but the program they’ve chosen consists of works that don’t really rely all that much on such things. Malcolm Arnold’s 3 Sea Shanties, Hindemith’s Kleine Kammermusik and the Wind Quintets of Françaix and Nielsen all ride the surface, more or less, and are bravura rather than sensitive pieces.

That being said, I found Variation5’s approach so lively, bracing and highly energized that, at least in this program, I didn’t miss those other niceties of detail all that much. Moreover, in certain moments, such as the second of Arnold’s Shanties, I detected moments of relaxation that played well into the feeling of the music. And even in the Françaix, one of my all-time favorite pieces, they managed to find little details and ways of phrasing that even escaped the highly esteemed New York Woodwind Quintet (in the days when John Barrow was still on horn).

After the bracing first movement, the group plays Hindemith’s Kleine Kammermusik with surprising delicacy and lightness of touch, leading the ear inward to some of his most clever transmutations. Yet it is in the Nielsen Wind Quintet that they really show their mettle, playing the music with a lightness of touch that creates magic of this score. The final movement in particular, with its stream of variations, is really special to hear, and throughout the engineers did a splendid job of capturing the instruments’ timbres, particularly the French horn, which is quite spectacular in the Nielsen.

All in all, a fine debut release, and one definitely worth hearing.