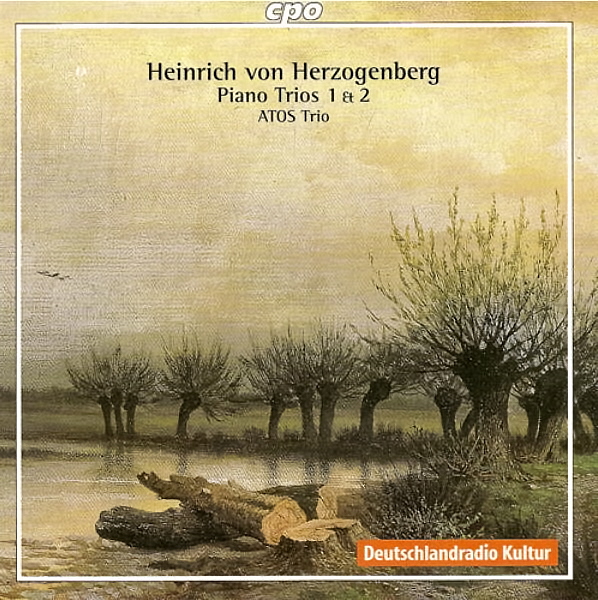 Heinrich Picot de Peccaduc von Herzogenberg, friend to both Brahms and Ethel Smyth, is one of many Romantic composers whose name has slipped through the cracks of history; but unlike many who get revived nowadays, he actually deserves notice.

It would be nice, and easy, to say that he was “just another Brahms imitator” and leave it at that. Nice, but unfair and not wholly accurate. For what, exactly, does it mean to “imitate” Brahms? What it meant, in the late 19th century anyway, was to be serious about the music you wrote, not flippant or trivial, appealing only to the masses; to have a long view of what you were writing and, if possible, to tie your ideas to a clear melodic structure; and, most importantly, to be passionate about what you wrote. This discards a good many composers who were said to be “like Brahms,” including Liszt, who wrote some very good pieces and a large amount of rubbish, and many composers (rightfully forgotten) whose music was so derivative that nothing original came of it. But Ethel Smyth, one of my favorite composers of that era—and a woman who dressed in tweeds, smoked cigars, rode bicycles and had a love affair with Hezogenberg’s wife, Elisabeth (known as Lisl)—was also an admirer of Brahms and one of Herzogenberg’s composition pupils. In fact, Herzogenberg showed Brahms one of her pieces, which Johannes doubted a woman could have written. But he was wrong, and apologized for his mistake.

To get back to Herzogenberg, however, these are powerful, big-boned piano trios, interesting and as far from polite salon music as one could possibly imagine, and the Atos Trio attacks them with gusto. There is an alternate recording of these works by the Arensky Trio, also played with feeling but played at a much slower tempo, with a good deal of rubato which may or may not be to your taste. For me, unless the composer’s name was Schubert or Chopin, I don’t care a whole lot for rubato in my musical performances. I like guts, and the Atos Trio is, symbolically, on fire from first note to last in these interesting works.

Perhaps Herzogenberg’s individuality, particularly in his use of harmony, stemmed from the fact that he was descended from an aristocratic French family. Educated at a Jesuit school before studying law, philosophy and political science, he became drawn to the music of Wagner but after intense studies of the music of J.S. Bach he became more of a classicist.

Herzogenberg had the attractive habit of ramping up both the volume and the intensity whenever he launched into an alternate theme. He also moved the instruments into their upper registers, which automatically gave the music more interest; and he did this in his slow movements as well as the fast ones. His continually interesting melodic lines are actually more memorable than most of Brahms’, and unlike the older composer he seldom dragged out his themes or let the grass grow under his feet. The continually shifting chords also add piquancy to the score, and to my ears his development sections are more organic, i.e., they sound as if an improvising musician were creating the variants out of the original theme(s). The second (slow) movement of the first trio consists of a theme and a series of variations, very much in the Beethoven and Brahms mold, yet somehow Herzogenberg manages to channel some of the former’s excitement along with the latter’s sense of structure. I questioned, while listening, whether or not the variant with the pizzicato cello should have gone quite as quickly as the Atos Trio plays it here, but the effect is certainly exciting, riveting one’s attention. In the ensuing variation, Herzogenberg shifts the focus from pizzicato cello to a continual series of triplets played on the piano, with good effect.

The harmonic leaps in the ensuing scherzo, marked simply “Presto,” will have you on the edge of your seat, particularly the way the Atos Trio plays it. Few of these harmonic jumps would have occurred to Brahms, and if they did, he’d probably have subdued some of them in order to create greater flow. Herzogenberg, however, revels in them, taking the listener on a wild ride.

Surprisingly, the last movement begins not only quietly but mysteriously, like a twilight fog creeping through the streets and around your house. It’s a rare moment of symbolism or, if you will, impressionism in Herzogenberg’s music; after the expected crescendo, however, the tempo becomes quicker and more energetic but the minor-major alternations in the harmony keep the feeling of unease in the music. Even in those moments of what appears to be unbridled exuberance, Herzogenberg keeps pulling the trio—and the listener—back to a slight feeling of unease, bordering on fear. It’s simply a remarkable piece of music by any criteria, and the Atos Trio plays it with gusto.

In the Trio No. 2, written in D minor, Herzogenberg sets up an almost elegiac feeling in the first movement, mitigated in part by the forward press of the “Allegro” tempo. The music shifts back and forth between the home key and its relative major, sometimes within a single bar, keeping the listener off-kilter before pursuing most of the second theme in A major, though going through a series of key changes, including A minor. There’s a remarkable passage around the seven-minute mark where the cello plays a broad, impassioned theme, only to have the piano come crashing down into the middle of it, disrupting the flow and building to an almost fever pitch before turning quiet again The lyrical second movement, in G-flat major, also moves fluidly in its harmony, with occasional dramatic spikes.

In this trio it’s the third movement, “Allegro molto,” that begins mysteriously, and like the first trio Herzogenberg sets up a particularly quirky-sounding 6/8 beat. There’s a surprisingly majestic-sounding tune in the middle of this movement, also in 6/8 but sounding more like a Prussian march, and Herzogenberg works it out in an interesting manner. This last movement begins in a ruminative vein, far less eerie than the last movement of the first trio, and quickly moves into an almost celebratory mood. Almost, but not quite, as Herzogenberg continues to keep us off-balance with his numerous harmonic shifts and the way he tosses the buoyant rhythm around within the trio. Here it’s the third strain, the trio theme, that sounds the most mysterious, with spikes of feverish energy coming and going within it.

Thus Herzogenberg had a great deal going for his music, certainly more than most other Austrian composers of his day. These are first-rate works that need and deserve to be heard, and these recordings are first-rate.