Having fully explored Bill Davison’s Danish recordings of the 1970s along with a disc of live material from Condon’s in 1952, I decided to go back in time to investigate his first recordings. Despite having been born in 1906 and playing professionally by age 20, these 1943-45 discs were his first. Many people have puzzled over this, but you have to remember that the field was pretty crowded in the ‘20s, that Davison was sort of a one-off, and his blasting trumpet or cornet tone with its growls, buzzes and lip vibrato was difficult to record. Commodore’s owner, Milt Gabler, was used to arranging jazz musicians for record sessions, however, and thus was somehow able to minimize the microphone damage when Davison cut loose.

Famous in their day only among “Dixieland” aficionados, the Davison Commodores have since become iconic recordings. It’s not difficult to understand, at least for the first 16 of them. The sheer energy level of these recordings is so powerful that listening to them sounds like a passing freight train barreling down the track at 120 MPH, with no intention of applying the brakes. It would be easy to say that this is just how Davison played all the time, throughout his entire career, which is true, but it wasn’t always that the rest of the band was swept along with such dynamism, and indeed when we switch clarinetists from Pee Wee Russell or Edmond Hall to Joe Marsala or Albert Nicholas, a certain amount of wattage is missing. The same is true once bassist Bob Casey is replaced by Jack Lesberg. It’s not necessarily that Marsala and Lesberg are poor musicians—they were not—so much as that Russell, Hall and Casey were on fire while the others simply played a gig.

In a way, it’s a shame that Davison never got involved with one of the prestigious white swing bands, as his compatriots Max Kaminsky and Bobby Hackett did. Jazz fans have particularly decried Hackett’s involvement with the extraordinarily popular big band of Glenn Miller, but his contributions to the charts he played on were almost always top-notch in quality and at times superb—and not just the big hits like A String of Pearls or Serenade in Blue but also in the band’s arrangements of From One Love to Another and Stardust. Miller adored Hackett’s special art and set him off like the crown jewel that he was. Had Davison signed on with Tommy Dorsey in the early ‘40s, he could easily have become the new Bunny Berigan. 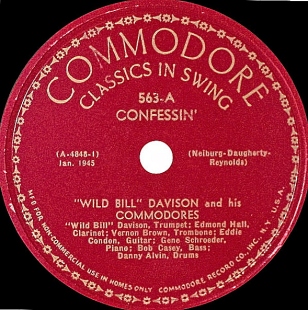 It’s never been entirely clear where Davison stood re: swing music since he was always open-minded to new ideas and in later life played a good number of swing-era tunes. Even in the context of this set, he does not stick strictly to the old tunes from the Teens and Twenties, but adds later songs like I’m Confessin’, A Ghost of a Chance and Wrap Your Troubles in Dreams, none of which would be considered prime Dixieland fodder. But there is no question that the majority of his bandmates preferred small-group jazz (clarinetist Edmond Hall made a famous series of recordings for Blue Note under the title of the Celeste Quartet with Charlie Christian playing acoustic guitar and boogie pianist Meade Lux Lewis on celeste) and, not being part of some swing band’s “small jazz wing” (the Clambake Seven, Gramercy Five, Bob Cats, Kansas City Seven or the various Ellington small bands), they stuck with Chicago-styled Dixieland, which finally experienced a revival around 1942-43. This was also the same era in which San Francisco cornetist Lu Watters came up with his Yerba Buena Jazz Band, playing old ODJB and King Oliver tunes in arrangements fairly close to the originals.

There were several original ‘20s musicians involved in this project: in addition to Davison, Condon and Russell, there was also trombonist George Brunies (he changed his name to Brunis in 1947 on the advice of a numerologist, since “George Brunies” had 13 letters in it) who had been a key member of the legendary New Orleans Rhythm Kings/Friar’s Society Orchestra. Known as the King of the Tailgate Players, Brunies was actually a trombone virtuoso whose playing was far in advance of such “sludge pump” players as Kid Ory or Eddie Edwards, and these recordings show him at his very best. Moreover, if you listen closely, you’ll note that the band eschews the traditional 2/4 “Dixieland” beat in favor of a more streamlined 4/4. This was clearly the influence of advancements in jazz since 1929, including swing.

Perhaps the least interesting soloists in these recordings are the pianists. They play decently but are surprisingly unimaginative, certainly not on the level of Arthur Schutt or Jelly Roll Morton. But then again, the various bands led by Eddie Condon rarely had pianists who played adventurously, and Gene Schroeder was one of Davison’s drinking buddies. Some online critics have unkindly said that Davison was a powerful player but an uninteresting soloist. I disagree. Within the style he played, he was surprisingly original. Not one of his solos proceed the way you “think” they should go. He took chances, veering off the melody and sometimes the harmony, though of course he was never as deep into the chord changes as his friend Hackett. But then again, Louis Armstrong himself was not really a “harmonic” improviser, either.

As for the replacement soloists in the later recordings, Joe Marsala deserves special mention. Chicago-born and trained, Marsala played a hybrid style of jazz that combined elements of swing and Dixieland on 52nd Street in New York. He had a beautiful tone and could really swing, but as these recordings show, he was no match for the incendiary brilliance of Russell or Hall, not to mention Goodman or Artie Shaw. His greatest claims to fame were two: he was among the first to integrate jazz in New York, and kept mixed bands through most of his career, and he took a girl harpist under his wing when the band she was playing with skipped town and left her in the lurch. That “girl harpist” was Adele Girard, who later became Mrs. Marsala. Joe taught her how to play jazz and how to improvise, and she quickly became one of the greatest jazz harpists who ever lived. The Marsala Quartet with Girard quickly became the talk of New York; even Armstrong dropped in to hear them and was bowled over by her swing and inventiveness. In later years, Joe became quite ill and incapacitated. Adele took care of him until he died, and made some late recordings on the harp that showed she still had it. He was one of the sweetest and most honest people in the jazz community, everyone admired him, but strictly as a jazz improviser he had too much competition to be remembered for his playing alone.

Albert Nicholas, New Orleans-born, was one of those many “Albert system” clarinetists (Omer Simeon, Jimmie Noone, Barney Bigard and Irving Fazola were others) who made their mark on ‘30s and ‘40s jazz. The Albert system clarinets were differently constructed and used alternate fingering based on the early 19th century 13-key system developed by Iwan Müller. They had a richer, more mellow tone than the standard clarinets. To the best of my knowledge, they were never used by classical musicians in the 20th century because you could play much faster and brighter on standard clarinets, but they are used by clarinetists who play Belarussian, Russian, Ukrainian and Turkish folk music. Nicholas was a pleasant musician but, to my ears, never a great one. I wonder why they couldn’t get Simeon to fill in; perhaps he wasn’t in New York at the time.

Some people have been excited by the fact that Dave Tough is the drummer on the last session, but although it’s true that Tough was also a Chicago-jazz original from the late ‘20s, he had modernized his style considerably by 1945, having played in Tommy Dorsey’s big band and then, at the time of these recordings, exploring a much more modern style in the progressive swing outfit of Woody Herman. If you listen carefully to these recordings, you’ll hear Tough playing a hybrid style of drumming halfway between Dixieland and swing.

All in all, the Davison Commodores were important recordings because, even more so than the Yerba Buena sides, they established Chicago Dixieland as a viable jazz style during the late Swing Era and helped keep it popular in later years when bebop was taking over the modern jazz world. It’s ironic that bop and Dixieland were then seen not only as contrasting but as “warring” styles. Except for the greater harmonic daring and often faster digital dexterity of the boppers, their essentially small-band brand of jazz had much more in common with the Dixielanders than with the heavier, sometimes rhythmically leaden big bands that emerged after World War II. But such was the nature of club life at the time that they were often vying for full-time gigs, and none of the small jazz clubs of the late 1940s had both a bop group and a Dixie group playing in the same venue. Eventually the Dixielanders made their home in two clubs, Eddie Condon’s and Nick’s in Greenwich Village, leaving 52nd Street to be taken over by the boppers and such advanced swing musicians as Art Tatum. For their time and place, the sound quality is surprisingly good. As I mentioned earlier, Gabler was a pro at setting up microphones and managed to capture a certain amount of hall resonance on the original recordings. The Wild Bill Commodores are thus both an important slice of jazz history and extraordinarily vital and exciting recordings in their own right.

Here are links to some of the best recordings as a taste of the set: