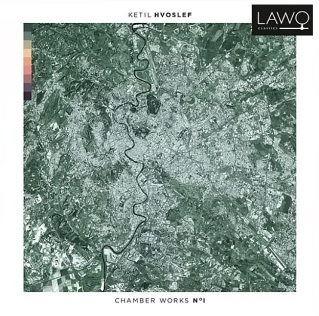 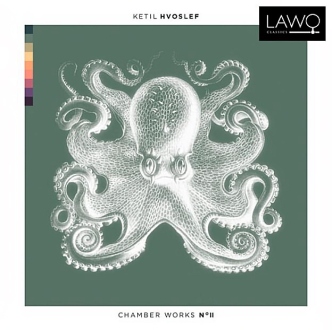 Unable to download or stream the album I wanted to review, which was Vol. 5 of this series, I turned instead to the above two discs and was glad I did, because they gave me a unique window into the mind of this strange but wonderful composer.

If you’ve previously heard of Ketil Hvoslef (1939 – ), you’re one up on me. Reading the liner notes for Vol. 1, it seems he had an unusual background to say the least. The son of composer Harald Sæverud and Marie Hvoslef, he originally wanted to become a painter but was arrested by the police for sketching a prominent office building in downtown Ljubjana. This apparently led him to music, which he entered as a rock & roll musician, forming Bergen’s first rock band, The Mixmaster. He studied at the Bergen Art Academy where he met and married Inger Flatebø. Thety were still both Sæveruds back then. When their first child was born in 1962, Ketil realized he had to get a real job and not just knock around as a painter or rock star, so he became an organist, studying at the Music Conservatoire. After graduation, however, he couldn’t find a job and so knocked around as a gardener until Gunnar Sævig, the conservatoire’s director, hired him as a music theory teacher.

He obtained some studies in Stockholm and London, wrote his first classical piece in 1964, but did not decide to become a full-time composer until 1979. That was when he decided to change his last name to his mother’s maiden name because he didn’t want people confusing him with his father. According to the liner notes, from which I’ve gleaned all of the above information, he “has worked assiduously at his music, receiving a fairly continuous stream of commissions, never exerting any apparent effort to make himself noticed. The comparatively few times he has been in the media have always been in connection with a specific project. On such occasions, he has always kept the necessary distance, aided by his refined sense of humor, making it apparent that he is interested in the work and does not wish any undue attention directed towards his person.” In short, he’s an eccentric hermit.

Interestingly, the first piece on the first album of his chamber music, Erkejubel, shows him much more strongly influenced by jazz than by rock music. Hvoslef uses a repetitive rhythm to propel the piece, but although his harmony is also a bit static he does not repeat the same melodic cells over and over again as the minimalists do. Rather, there is a continual shift and change, moving from staccato eighth notes to a B theme in half notes, moving back and forth between them for the development section. A strange passage around the three-minute mark is played by muted trumpets, followed by what sounds like bongo drums and open trumpets, while an electric piano plays a repeated single-note motif against this. Sustained organ notes come and go throughout the piece as well. Duo due, which follows, begins with a dramatic, double-time string figure, after which a cello drone is set up against edgy figures in the upper strings. Again there is an insistent rhythm, but here it’s different from Erkejubel. slower and less jazzy in scope. The liner notes describe his style as “the accumulation of latent energy, rhythmical ingenuity and, often, an element of humor.” I would go so far as to say that varied but insistent rhythmic patterns lie at the heart of everything Hvoslef writes, just as they did with Beethoven. The only real difference is that Beethoven was able to overlay his rhythmic devices with extraordinarily long and complex melodic lines and development, whereas Hvoslef is far more economical in his gestures. In Duo due, for instance, he is content to explore a narrow path of development in the violin figures, with each phrase and gesture tied to the rhythm. Beethoven always kept his rhythm going but allowed the top line far more freedom and latitude in its explorations. In other words, Beethoven used his rhythmic energy to propel the music into complex realms whereas Hvosloef ties the music to his rhythms. What keeps one’s interest up are the remarkable variations he makes in his rhythm and the unexpected directions they take.

The Frammenti di Roma, written for winds, begins much more lyrically than the previous two pieces, but by the second segment or fragment he is up to his old rhythmic tricks, overlaying the oboe and clarinet on the bassoon in opposing rhythms which continues even into the slow segment, No. 3. In Fragment No. 5, Hvoslef can no longer contain himself and returns to staccato rhythms played against one another for a whole 58 seconds, followed by a more lyrical and jazzier episode in 40 seconds! It amazes one to hear how varied he can make this technique sound, resistant to repetition or banality, even as he shifts gears in tempo and phrasing.

In Scheherazade forteller videre, Hvoslof has fun sending up Rimsky-Korsakov’s sappy music from over a century ago, deconstructing it and replacing its goopy Romantic tune with edgy rhythmic cells, played only by a violinist and a harpist. The former almost sounds as if they’re playing Hungarian gypsy music, and Hvoslef is able to maintain this musical balancing act for more than 17 minutes. Here, his music does not become more rhythmically complex but, rather, exponentially simpler, eventually reducing it to basic notes that somehow keep returning to Rimsky’s mundane Scheherazade theme. Eventually the violinist explodes into quadruple-time figures, sounding a bit like a country music fiddler, while the harpist ruminates around the edges.

Canis Lagopus begins with what sounds like a snare drum beat in strict military time, but turns out to be someone tapping their bow to their cello. The viola explodes in a sudden outburst of sound as the cello goes to bowing his instrument and woodblocks suddenly appear in the background. Exploding snare and tom-toms are payed against insinuously rising string glissandi, then string tremolos, followed by edgy bowing in the upper strings and pizzicato in the lower as the percussion comes and goes. This is really crazy stuff! A single plucked violin or viola is heard against sustained cellos and basses, then the snare drum returns in earnest. Eventually the tom-toms take over, creating complex patterns while the strings ruminate around them.

In Vol. 2 Duodo begins, again, with edgy violin figures, different from but related to those of Duo due. Interestingly, here Hvoslef finds a fairly nice, conventional melody for the viola while the violins play choppy figures with the edge of their bows. Hvoslef is able to play around with this idea or set of ideas for nine and a half minutes by shifting the beats, moving them around to different instruments within the ensemble, and both reducing and varying the melodic tune.

The rather brief (1:51) Ludium presents us with flutes playing a lovely melodic sequence (it almost sounds Rimsky-ish, once again) over alto flutes. By contrast, the Flute Octet runs 11 minutes, begins with a dramatic flourish like the opening of Bach’s Toccata and Fugue in d minor, then playing serrated figures by half the flutes over sustained notes by the other half. Once again Hvoslef toys with our expectations of how the rhythmic shifts will go, moving the stress beats around from measure to measure to suit himself. At around the seven-minute mark, he smooshes the flutes together into a weird tone cluster before separating them and moving on to other and different rhythms. Later on the upper flutes scream in protest to the repetitive rhythm set up by the lower ones, and keep on screaming to the end like the shower scene in Alfred Hitchcock’s Psycho.

In Dano tiore, Hvoslef mixes a soprano voice in with the strings, reminding one of the many such pieces that Luciano Berio wrote for Cathy Berberian. Hvoslof plays no favorites towards the singer, however, forcing her to jump around her range like a jack-in-the-box. She thus becomes another instrument in the ensemble, standing out only because she gets the most solo space. It helps a great deal that the soprano soloist, Hilde Haraldsen Sveen, has a clear, pure voice with no wobble, a range of close to three octaves, and impeccable diction. Around the 10:45 mark the singer is performing the rhythmic patterns while the strings become more lyrical, then they switch again, followed by a passage in which both voice and strings are performing rhythmic patterns against the harpsichord.

As someone reared in a family that was mostly Polish, and forced me to be their performing monkey playing polkas on the accordion, I cringe every time I hear the instrument, even in the hands of a jazz master like George Shearing or Art van Damme. Nonetheless, Hvoslof plays no favorites and thus attacks the accordion the same way he attacks strings, winds and voices. It’s almost comical to hear accordions play his music, however, kind of like hearing Hawaiian guitars playing Stravinsky. Or something like that.

And like accordion duos, those independent record producers who supply me with review material know that I have zero tolerance for percussion ensembles. I don’t just dislike them, I really hate listening to them, thus I almost skipped the Quartetto Percussivo entirely. I’m glad I didn’t, because Hvoslof uses the percussion in a wholly unique way, and the “percussion” includes two pianos, so it’s not just four guys banging around on whatever they happen to have at hand. Hvoslof sets up a moto perpetuo between the two keyboards, who play joyous if atonal figures nonstop while the two drummers have a field day accompanying them. Eventually a xylophone enters the picture, playing apposite figures against the pianos, followed by a quirky, galumphing rhythm set up by the remaining percussionist. In a way, this piece almost sounds like Ballet Mécanique Jr., alluding to the classic George Antheil piece of the early 1920s. The pianos quiet down to playing isolated single notes while one of the percussionists wails away at woodblocks. A chime is heard, then choppy, rising thirds on the pianos that come and go. We return to the running piano figures and dramatic percussion, once again channeling Antheil, before the volume is reduced to low piano bass notes with triangle while the other pianist softly plucks notes on their instrument. And that’s just the first eight minutes!

Hvoslof has fun playing with rhythm and texture throughout the remaining 11 minutes of this Quartetto, once again enticing the listener and then undermining his or her expectations. By the 11-minute mark, the percussion is really getting into its highly syncopated figures, sounding almost like Gene Krupa on Sing, Sing, Sing. Then we get really quiet, with undulating soft tympani, equally soft, intermittent piano figures, and triangle. This cat-and-mouse game continues through to the end.

If you have a tolerance for musical adventure, discovering the music of Ketil Hvoslof will be a real joy for you. Highly recommended.