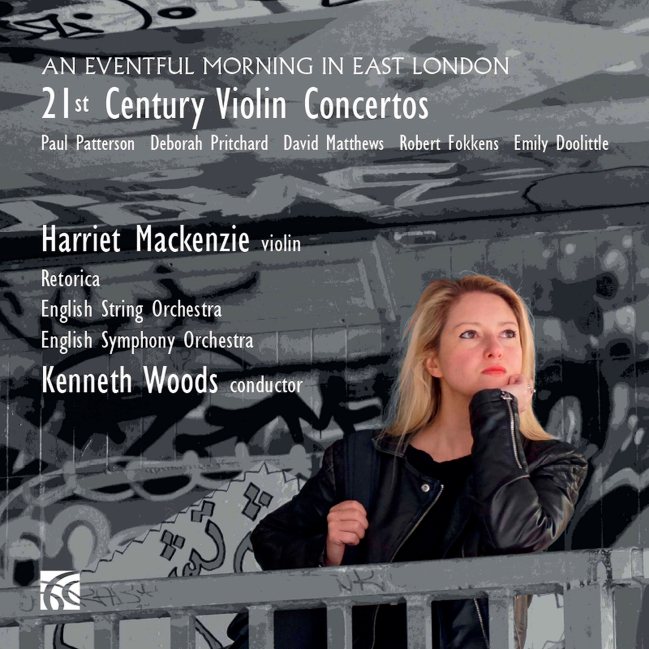 As violinist Harriet Mackenzie put it in her liner notes, “Contemporary music has always interested me. It is exhilarating to receive a score, often unseen by anyone else other than the composer. Something that only exists in the twilight – an unrealised existence in the composer’s mind, stored in some black notes on a white background, waiting for flesh and blood in a performer’s hands to incarnate it.” This album is made up of five such works, diverse in style yet all rooted in a desire to communicate with the listener and not just shock him or her.

So much is evident in the opening work, Paul Patterson’s Allusions for 2 Violins and Strings. This is the most typically “British” music on the disc in the sense that it uses Britten-esque harmonies, particularly in its first movement which is otherwise based on the final fugue of Verdi’s Falstaff. This is a swirling, dancing sort of piece that would make a wonderful stand-alone showpiece for an orchestra and two violinists. The solo parts stand out only slightly from the body of strings used, undoubtedly on purpose. The second movement, titled “Mindscape,” also employs similar chords but is a mysterious, moody piece in which the solo violinist(s) take center stage against a backdrop of quiet strings playing whole tones. When the orchestra does become a bit more active, it is still playing in the background, contributing quiet, fluttering tremolos to the texture. Without seeing the score, it’s difficult to tell which solo violinist is playing what except for those moments when they obviously play against each other in apposite lines. Eventually the music becomes more agitated, both in tempo and volume, as the cellos play dramatically behind the two soloists for a couple of bars before falling back to string tremolos played by the violas while the cellos introduce a brief, lyrical melody. The third movement, “Beneath the Surface: Presto,” incorporates a brief quote from Mozart’s Le Nozze di Figaro while creating a brisk, swirling environment for the soloists and orchestra to play in. It’s a brief but energetic finale to the concerto.

Deborah Pritchard’s Wall of Water was composed as a musical representation of artist Maggi Hambling’s series of paintings, Walls of Water (one of which is represented below). The music, curiously enough, starts out in a slow, moody manner, like a lazy sea with little activity, with the solo violinist playing above subtly rumbling basses. Eventually the orchestra gets slowly more active, working its way up the groups of strings until the violins are playing soft but ominous tremolos behind the soloist. By the 6:30 mark the music has become more agitated, the tempo now rather swift with serrated figures being played by both the orchestral members and the soloist. This then becomes more of a “mood and nature” piece, with the serrated figures evidently emulating waves, yet it never quite reaches a point of being a “wall of water” until late in the piece. What I particularly liked about it, though, was the fact that Pritchard never took her mind off the fact that this is supposed to be a developing piece of music and not just a mood piece; thus the mind is continually engaged in following the strands of the piece as they evolve and coalesce.

One panel from Maggi Hambling’s “Walls of Water.”

Next we have a piece by a composer I really know and admire, David Matthews, whose violin music I recently reviewed on this site. His Romanza is typical of his work: rhythmically lively, harmonically modern but never ugly, the whole piece just a delight to the ear as it plays little tricks with displaced beats and surprising modulations. This may not be one of his greatest gems, but it’s so good you’ll want to hear it over again.

An Eventful Morning Near East London, by Robert Fokkens, has the violin entering, and staying, in the extreme upper range of the instrument for some time. The opening note is a D-flat (or C-sharp) in alt, and she goes up from there. Moreover, the strings in the orchestra have similarly perilous lines to play. Eventually the rather calm opening becomes more agitated, and Fokkens creates some particularly interesting textures in the orchestral part behind her. It becomes busier and more bizarre as it goes along, yet holds the listener’s imagination by its sheer variety and quality of sound. Except for the fact that it has a more regular pulse, it almost sound like something that Leif Segerstam would have written! Eventually Mackenzie comes down in pitch to play some wavering drones on her instrument, which then lead to a brief but genuine melodic line, backed by soft chords played by low clarinets. This is a truly fascinating piece, indeed the highlight of this album. How ironic that I reviewed it just two days after East London had its most “eventful” night in ages, the monstrously evil Islamic terror attack that killed seven and left 40 wounded, many of them critical.

The recital ends with Emily Doolittle’s falling still, a piece “inspired in part by sounds from the natural world, though more abstractly so than many of my other nature-related pieces.” It’s basically a quiet mood piece written in widely-spaced harmonies, attractive but not, to me, particularly interesting.

For the most part, however, this is a terrific album, well worth a listen!