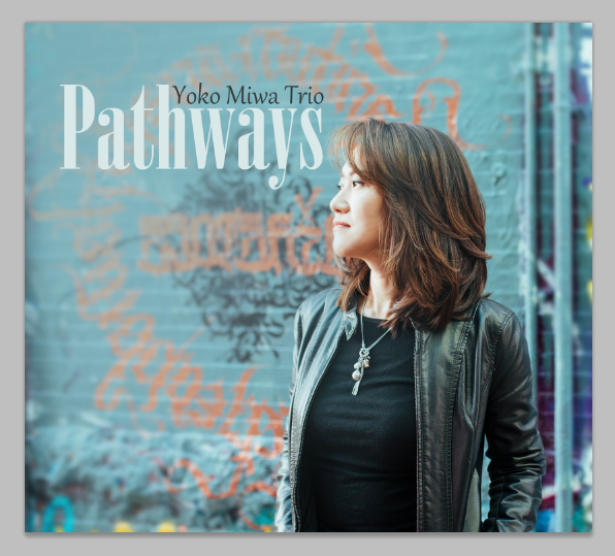 Priot to hearing this CD I was unaware of Yoko Miwa or her manner of playing, but I found it highly engaging and interesting. The album begins with a piece by Marc Johnson titled Log O’Rhythm, evidently a pun on algorithm, and this turned out to be the weakest composition on the disc. The obsessively repetitive opening lick simply went on too long, about two minutes in fact, although once the trio shed it things got interesting. Miwa seems to have been influenced in part at least by such players as Mulgrew Miller and Vince Guaraldi, having the Gospel-flavored licks of the former and the buoyant, happy sound of the latter. It’s the kind of playing that is immediately engaging, and once we get past the sheer joy of it all we realize that Miwa is a fine improviser who almost underplays her technique in the service of a cohesive structure.

This ability is evident in one of her own compositions, Lickety Split, the opening bars of which bear a strong resemblance to Sonny Rollins’ Pent-Up House. Here, in her first full chorus of improvisation, Miwa does indeed toss in a few sparkling piano arpeggios, but once again they are part and parcel of a longer evolving piece. Another great feature of her playing is her sheer energy; Miwa is no shrinking violet at the keyboard! She plays with tremendous energy, as did the late, legendary Dorothy Donegan, making no excuses for the fact that she loves creating music. This track also introduced me to her bassist, Will Slater, whose solo is sparse yet also well constructed. Drummer Goulding also has a solo on this track. Sadly, Joni Mitchell’s lame pop tune Court and Spark was a down moment in this otherwise splendid program, starting with a typically namby-pamby melody and going nowhere (mostly because there was nowhere to go with it). Miwa tried her best to make lemonade out of this lemon; her improvising skills were on fine display here; but you simply can’t make a silk purse out of a sow’s ear, and once she stopped improvising we were back where we started.

Happily, we get back on track with Miwa’s The Goalkeeper, an old-fashioned type of swinger in which the trio plays with outstanding precision, enhancing and emphasizing the rhythm in a most delightful manner. Miwa also sounds as happy as the music, rollicking throughout with jolly runs and triplets interspersed with her Miller-flavored moments of Gospel jazz. Slater also responds well with his own sparkling solo. Marc Johnson also wrote After You, built around a simple, repeated lick that Miwa and her skilled trio turn into excellent jazz, and Slater plays one of his finest solos on the album in this track. When Miwa returns, Goulding plays an interesting backbeat shuffle rhythm that evolves into a Latin beat, with Miwa leading the trio like a master race car driver, building up a good head of steam towards the finish.

Miwa’s original, Lantern Light, is a nice ballad with an attractive melody which she develops beautifully. Typically of her approach, the ballad feel does not stay low-key throughout, but morphs into some exciting and dynamic playing, here including more sparkling runs as part of the improvised section. When the tempo pulls back for Slater’s solo, it almost seems pre-ordained, as if both the bassist and the pianist-composer felt the need for just this sort of relaxation in the midst of the piece. Some interesting press rolls from Goulding introduce a rhythmic shift near the end as Miwa plays a repeated cycle of chords, before treating us to an free-tempoed improvised cadenza for the finale.

Was It Something I Said? is one of those tunes that are rarities nowadays, a mice medium “walking” tempo. Miwa sounds completely comfortable and at home in this, as if it were a kind of jazz she has been playing all her life. Interestingly, although she uses some chunky chord progressions in her solo, she does not fall back on formulaic patterns, but rather keeps the flow and structure of the music moving at all times. This is the kind of song that you wish would go on all day!

The album’s closer is highly unusual, the Beatles’ sparse tune Dear Prudence from the “double white album,” one of many songs by Paul McCartney on that collection that John Lennon detested (among the others he hated were Bungalow Bill, Rocky Raccoon, Birthday and Martha, My Dear). Interestingly, Miwa is able to make real music out of this trifle, cleverly using unusual beat shifts from the very beginning and deconstructing the sparse melodic line to turn it into a calypso number. On this track bassist Brad Barrett replaces Slater, and his slightly funkier sense of rhythm helps in the transformation. It makes a great closer, then, not because “it’s a Beatles song” but because of what she does with it. Words fail me in describing how creative and yet swinging this piece is. I maintain that, in a blindfold test, not even Paul McCartney would recognize his own song here, at least not until around 5:55 when Miwa finally alludes to the original tune for half a chorus!

Pathways will be available for sale on May 12 of this year. It’s a fun album!