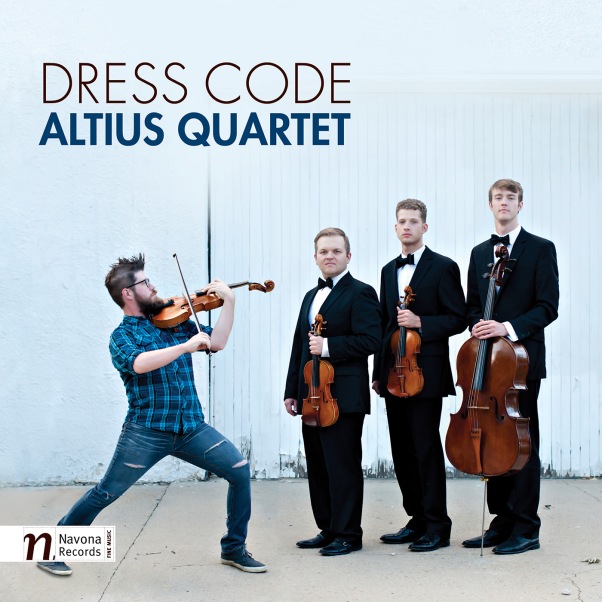 This is the debut CD by the Colorado-based Altius String Quartet. The publicity blurb accompanying this release says that their mission (they need a mission? do they have a due date and are they getting instructions from the CIA?) “is to strive for universality in their music and communicate directly with their listeners.”

Basically, the layout of this album is that Haydn’s String Quartet Op. 74 No. 1 is split up with one movement played every two or three tracks, Bolcom’s Three Ghost Rags given the same split-up treatment, and then several rock, disco and hip-hop novelties are interspersed among them. All of the latter were arranged by cellist Zachary Reaves. Of course their playing of the Haydn is strictly in keeping with the religious belief in historically-informed practice, meaning that it is brisk and crisp with no “give” in the rhythm and uses straight tone throughout. I found it peppy in style but a tad mechanical, though they did inflect the music with some dynamics changes which is a step in the right direction. Were they to specialize in this kind of repertoire, I would suggest that they listen to the Takacs Quartet’s classic accounts of Haydn for a few pointers on musical style.

Although I am a huge Dave Brubeck fan, I must admit that I didn’t have a clue that Michael Jackson had collaborated with him on a new piece using music from Paul Desmond’s Take Five. If Jackson himself made this arrangement, he attributed the wrong composer, but the upshot of it is that this is one of the most delightful pieces on the entire CD. Here Altius is (pardon the trite expression) in their element, giving a nice, loose feeling of swing to the piece, particularly in those moments when Take Five is directly quoted. This is considerably better than their Haydn, almost on the level of the legendary Turtle Island String Quartet.

Interestingly, although their performance of Bolcom’s first rag, Graceful Ghost, has a nice ragtime feel to the rhythm, their treatment seemed to me just a shade over-delicate, as if they were afraid to let go and enjoy themselves. Perhaps their live performances have more spirit to them (sorry about that).

Next up is their reinterpretation of Led Zeppelin’s Stairway to Heaven. Since I’m probably the only human being on Planet Earth who never heard this record, I went to YouTube and listened to the original before judging this performance. Needless to say, I found myself suffering through Led Zeppelin’s performance, with a great deal of private eye-rolling. Most of it is a banal tune endlessly repeated with different lyrics in each verse, eventually leading up to the ubiquitous “heavy metal jam” section, which pretty much sounds like what it is. Heavy. Metal. Jam. Think of an explosion in a boiler factory. Mercifully, Altius plays it with much more grace and charm, varying their approach with sections of pizzicato accompaniment and subtle modifications in the melodic line, though there’s not a whole lot you can do with an eight-bar loop that repeats itself ad infinitum. As the performance evolves, however, they perform some really interesting variants in place of the “jam” section, showing that their musicality is far above that of the average heavy metal group (thank goodness). Following this with the second movement of the Haydn quartet was a bit of culture shock, though, and I wonder how their audiences feel about such juxtapositions. This slow movement was, I felt, the least successful because they didn’t seem to have much feel for it beneath the surface of the notes.

Bolcom’s second rag, Poltergeist, is jauntier in rhythm if still (to my ears) a bit held back in feeling. Altius seems to have good instincts but not always the ability to give of themselves in performances of this type of music. That being said, Poltergeist is a more varied and inventive piece than its predecessor, and Altius does seem to enjoy some of its quirky turns of phrase. Immediately following this is the “Menuet” from the Haydn quartet, played in an even jauntier style than Bolcom’s rag. Well done!

The third Bolcom piece, Incineratorag, follows immediately after, and here Altius really unbuttons their vests and gets down and happy with the music. A superb performance, thoroughly enjoyable and fully in the spirit of the music. With Ben E. King’s Stand By Me, we finally reach a rock tune I know (and like), and their performance of it is also splendid. Here were three consecutive tracks of really loose, relaxed, unbuttoned playing by Altius. The last movement of the Haydn quartet is spirited, but alas,not as rhythmically relaxed as their performance of the minuet.

I have to make a second admission, that not only have I never heard Take on Me but I didn’t even know who, or what, A-ha was. I had to look them up on Wikipedia. Apparently they’re a Norwegian rock band. Reflecting on my bad experience in listening to Stairway to Heaven, I took a pass on listening to A-ha’s original version of this tune. Taking Altius’ performance on its own merits, it seemed to me rhythmically stiff and melodically threadbare, but hey, what do I know about this kind of stuff? I like music that is interesting and challenging, not repetitious claptrap.

The back cover inset to this CD only shows 11 tracks, the last being Take On Me, but my download mp3s included a twelfth track, Mack Rice’s Mustang Sally. Like Stand By Me, their performance of it is light and lithe, with plenty of spirit. Personally, I would have made this the official closer of the CD and put Take on Me as the bonus track for download.

All in all, the Altius Quartet is highly skilled and have a nice proclivity for music outside the mainstream. I suppose that their Colorado audiences enjoy the Led Zeppelin and A-ha things more than I did. My gut feeling is that they should specialize in playing jazz-influenced and classic rock pieces and chuck the Haydn overboard. An interesting first release, though.