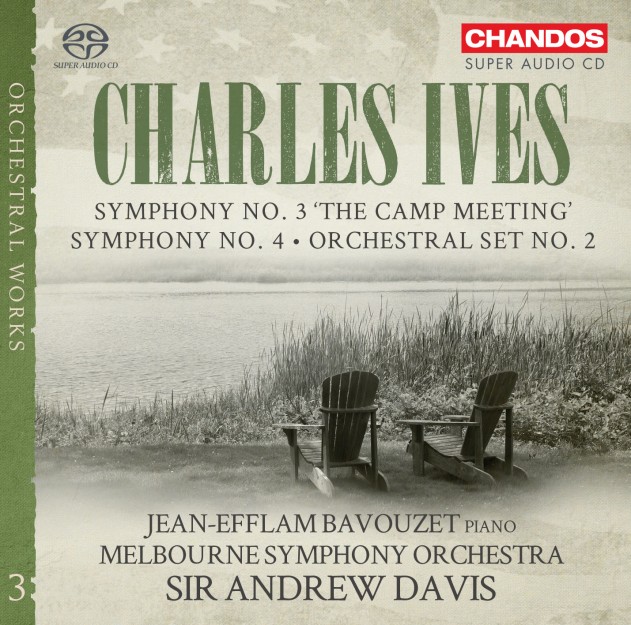 This, the third of Sir Andrew Davis’ series of CDs of Ives’ Orchestral Works, may be the most valuable so far. True, Davis, like many modern conductors, occasionally “smooths out” some of Ives’ rough edges in his music, giving performances that do not lack dynamics changes or a sense of drama but tend to homogenize what the crusty old New Englander actually wanted. If the reader will peruse my recent review of Sony Classical’s reissue of John Kirkpatrick’s great 1968 reading of the “Concord” Sonata, you’ll see what I mean. Ives was always trying to capture and convey the raw energy of the military and marching bands he heard as a youth, and their somewhat rough playing was always in the forefront of his mind.

That being said, I really do believe that Davis has finally cracked the hardest nut in the Ives catalog, the Fourth Symphony. This always was one of Ives’ most difficult pieces to perform, and until now I’ve never been quite convinced by anyone’s recording of it. Part of the problem is that the work demands a large orchestra, split in two and playing against one another, a technique Ives often used in smaller scale throughout his career, but in this case it caused more problems than it solved. Ives wrote a 40-page introduction to the score, trying to explain how he wanted the work performed, and oddly enough he actually got to hear the first two movements in his lifetime. At Town Hall in New York on January 29, 1927, the first two movements were played by 50 members of the New York Philharmonic-Symphony, as it was then known, conducted by Eugene Goossens. This was a sufficient size orchestra for the first movement, but the second requires twice as many musicians. The result was apparently professional but unsatisfactory to Ives. On May 10, 1933, an arrangement of the third movement by future film composer Bernard Herrmann was performed, but I haven’t seen any comment by Ives on this performance. These were the only times part of the score was performed during his lifetime.

The world premiere of the complete score was given, also in New York, on April 26, 1965 by Leopold Stokowski’s American Symphony Orchestra. The performance was co-conducted by Stokowski and José Serebrier. You can hear this performance on YouTube here. Shortly after this performance, Stokowski recorded the work for Columbia. My take on the Stokie version is of a sincere effort to make sense of the sometimes abrasive and unusual music without really being able to make it coherent—a rare failure for Stokowski, whose calling card had always been the ability to make modern music, even that of Schoenberg, palatable to the average listener. In all the years since, I’ve sampled only a couple of other recordings of this work because my experience with the Stokowski recording was so negative, and to be honest I’ve found them even more jumbled and confused-sounding that Stokie’s version.

But not here. From the very first note to the last, Davis and the Melbourne Symphony have the full measure of this thorny score, and although they play the music more “beautifully” than Ives might have liked they do not smooth it out too much. On the contrary, I found that by balancing the various sections of the orchestra and chorus and having them go, so to speak, all in the same direction, Davis has finally cracked the nut of this thorny work, much the same way that conductors like Simon Rattle and Claudio Abbado finally made sense of Mahler’s equally difficult Seventh Symphony several decades ago.

Of course, I should point out that since Stokie’s world premiere of the work, the original 1965 score (published by G. Schirmer) has been replaced by the new Charles Ives Critical Edition in 2011. The scores here were edited by William Brooks, James Sinclair, Kenneth Singleton, Wayne Shirley and Thomas M. Brodhead, and it is Brodhead’s edition of the Fourth Symphony that is given here. Brodhead is, it seems, responsible for taking the “largely unperformable but compositionally intriguing state in which Ives left it in his manuscripts” and making a legitimate performing edition out of it. This version was premiered at the Lucerne Festival of August 26, 2012 by conductor Peter Eötvös.

I give all the credit in the world to Brodhead for making sense of the senseless, so to speak, and even more so to Andrew Davis for really “digging in” to this score in all its grotesqueries and not flinching or smoothing out too much. There are some extraordinary moments here, such as at the five-minute mark in the second movement when the ostinato rhythms played by piano and orchestra bear a striking resemblance to George Antheil’s Ballet Mécanique, which Ives may certainly have known about since it was written in the early 1920s. But what I like most about this performance is the manner in which Davis pursues the clashing, grinding sound of Ives’ brass and wind passages with a clear eye and unflinching momentum. The soft textures of the Melbourne Symphony’s strings, attractive to the ear, may on the other hand not be exactly what Ives had in mind (note particularly the third movement), but I didn’t mind them so much because Davis really knows what he is doing. The result is a monumental performance, one that will stay with you for some time, and moreover one that sounds consistent in both style and “feel” to the Second and Third Symphonies, the latter of which is also on this excellent CD.

The Third Symphony, scored largely for strings and not nearly as challenging as the Second or Fourth, is given a warm and jovial performance here, perhaps a bit warmer and more jovial than Ives himself would have wanted, but we’ll never know for sure. Davis also gives us a robust account of the Orchestral Set No. 2, the components of which are “An Elegy to Our Forefathers,” “The Rockstrewn Hills Join in the People’s Outdoor Meeting” and “From Hanover Square North, at the End of a Tragic Day, the Voice of the People Again Arose.”

But all things being equal, you need to get this CD for the performance of the Fourth Symphony. This is the crowning glory of this release, and a performance for the ages.