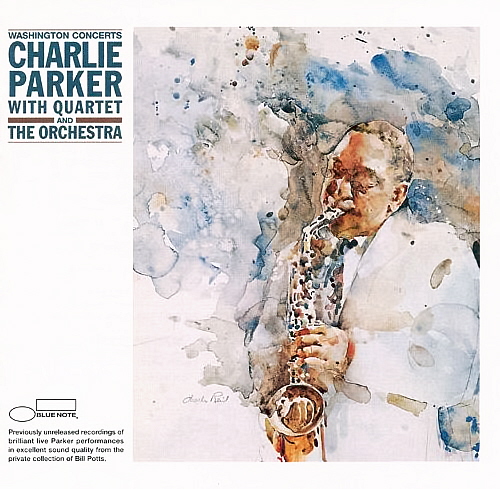 This unusual Bird album is a compendium. The eight tracks with “The Orchestra,” apparently a Washington, D.C. jazz band, were originally issued as an LP in 1982 on the short-lived Elektra/Musician label. Then, in 2001, the album was reissued on CD with the additional five small-group performances you see here and the brief interview with trumpeter Red Rodney. After being out of print for a few years, Blue Note has decided to bring it back.

This is simply extraordinary Parker, at the height of his powers, which is—as most jazz fans know—somewhat surprising for this stage of his career, when his inspiration ran rather hit-and-miss. Although The Orchestra has a good, solid sound and gets the bop rhythm right, there is very little to distinguish them as a jazz orchestra on this particular outing; they are merely a backdrop to Bird, albeit a very good backdrop. Parker plays some truly excellent solos, beautifully constructed and interesting from start to finish. He is ready every single time the spotlight is on him, and there is a special joy in hearing a live set with Bird so well recorded. Too often we get stuck with high inspiration and really low fidelity, possibly the worst case of all being the infamous “Bird at St. Nick’s” album, but here the tracks all sound professionally set down on tape, which is all to the good.

The small group performances are even more inspired, but here we have some roughness of sound, particularly in Parker’s alto sax, while the rhythm section sounds tubby and dull. Yet these performances are, if anything, even hotter and more inventive—including some very humorous turns of phrase—than the ones with The Orchestra. Drummer Max Roach really gets into it on Cool Blues, propelling the altoist with an extra kick, and this version of Anthropology, despite the rough sound, is one of Parker’s greatest moments. He plays it at an absolutely blistering pace, but speed is not everything; his solo is so full of original ideas that a clever composer could easily create at least five different pieces built around certain phrases that he plays. Only at one point does he insert one of his patented licks; the rest is pure invention. If I were asked to play only one record to show someone how great Charlie Parker was, I think this would be it. He is on fire, he plays like an inspired madman, and the whole is greater than the sum of its parts. I should also point out, as few reviewers have, that pianist Jack Holliday (a member of The Orchestra) also plays his heart out here. It certainly couldn’t have been comfortable for him to follow Bird at this high a level, but his solo is more than credible and I give him high marks for at least trying. (Could you have come up with something as good?)

Scrapple From the Apple is also highly inventive if lacking in the sheer muscularity of his Anthropology solo. What I always find so amazing about Bird is not the rapid-fire sixteenths but the way he dovetails his phrases. As in the case of Django Reinhardt, one of the few jazz musicians of that time on his level, it’s not just the speed of his playing that impresses but the high quality of the content. Here, for instance, Charlie Byrd, a really fine guitarist, plays the middle chorus, but Byrd isn’t close to Parker’s level of invention. Oh, how I wish Django had been stateside at the time and sat in! Pianist Bill Shanahan, a name unknown to me, plays a really fine solo on Out of Nowhere. After what sounds like a cadenza before the closing couple of bars, Parker suddenly ramps up the tempo and launches into a splendid version of Now’s The Time. Trombonist Kai Winding makes a surprise appearance on this tune only. His solo fits in beautifully by trying not to be Bird. Yet another surprise is a multi-chorus cameo from Zoot Sims, who likewise plays in eighths rather than sixteenths and contributes a really nice solo; Winding comes back in when he’s done for another go-round while Parker and Zoot play some really nice riffs behind him. This is a rare example of the kind of invention that Parker probably came up with regularly when working with slightly larger groups, and it shows how well he could fill in behind another soloist. Charlie Walp, another member of The Orchestra, contributes a really fine trumpet solo, now with Winding joining the two saxists behind him. Call me crazy, but this is one of my new all-time favorite Parker tracks.

I’m not quite sure why producer Bruce Lundvall chose to interview Red Rodney for the original LP issue, but he tells us exactly what I mentioned above, that Parker could just fall into any musical setting without much or any rehearsal and produce pure genius. One of the more amusing stories here was his getting his plastic saxophone, which he played on and off as he needed money and so kept pawning his brass Selmer. “I think he could have played a tomato can and made it sound great,” Rodney tells us, “and he was really a shy, humble person, and he was thoughtful and considerate of other people.”

Just about the only negative I have of this album is that the cover illustrations look only vaguely like Charlie Parker. Other than that, this is one of the indispensable “live” Bird albums.