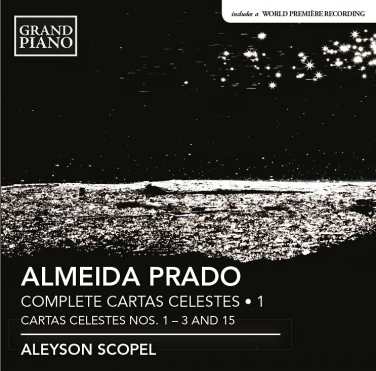 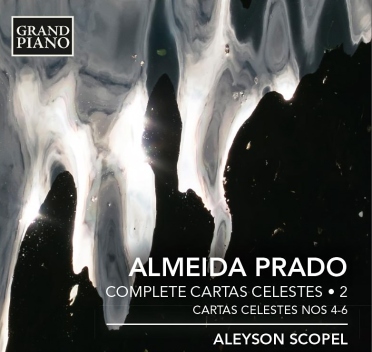 Brazilian composer José Antônio Rezende de Almeida Prado (1943-2010) studied piano with Dinorá de Carvalho, harmony with Osvaldo Lacerda and composition with Camargo Guarnieri in Brazil before winning first prize in 1969 for his cantata Pequenos Funerais Cantantes. He then continued his studies in Europe with Olivier Messiaen and Nadia Boulanger from 1970 to 1973 in addition to brief stints with György Ligeti and Lukas Foss in Darmstadt.

According to Wikipedia (my source for much of this info), after his return to Brazil in 1974 he taught at the Conservatório Municipal de Cubatão before becoming a professor at the UNICAMP Institute of the Arts, retiring in 2000. After his retirement he settled in São Paulo, where he occasionally taught music courses and presented a radio program at Cultura FM.

I have to admit that he and his music are new to me, but these CDs are more than an introduction; they are a total immersion. The Cartas Celestes or Celestial Charts are his pianistic view of our galaxy, ranging from meteors, globular clusters, and constellations to the six closest planets, and in them he uses the piano like no one else I have ever heard—not even Alkan or Sorabji, two of the titans of the instrument. Rather, Prado sweeps across the instrument like a swarm of stars, literally consuming everything in its path. He doesn’t so much use tone clusters as much as he does mushroom clouds of sound. The pianist is called upon to explore and exploit virtually the whole of the instrument as if he or she were building a new musical device from the ground up. I often got the impression, listening to this extraordinary music, that Prado was channeling some of the “music of the spheres,” the electronic signals recorded by Explorer space capsules in the form of electromagnetic sounds. He didn’t so much write piano pieces as he did nebulae, capturing in sound waves a spectrum that encompasses nearly every known combination of tones known to man. I almost felt, when listening and being overawed by him, that he wasn’t even thinking in terms of “music” in the strict sense but, rather, would have been very happy with one of Harry Partch’s microtonal pianos.

This isn’t to say that his sense of harmony is not thought out or that he just runs helter-skelter over the keyboard, producing incoherent sequences of sounds. That would have been the easy way out…just flip your fingers randomly over the keys and let the chips fall where they may. The biggest surprise of this music is that it IS structured, and logical in its own way, that it holds together and keeps the listener’s interest. Cosmic it maybe, but random it is not. It is claimed that Prado used “a new harmonic language called ‘transtonality,’” but by the time he wrote these pieces we already had ground breaking works by Ives, Partch, Ligeti and George Russell, all of which broke harmonic boundaries before him and in fact created the harmonies he uses here. So in that sense, I rebuke his claim of originality, but that still doesn’t detract one whit from the dazzling sound universe he created here.

The first of these Cartas Celestes was written in 1974, commissioned as incidental music for a spectacle at the São Paolo Planetarium. In this work, Prado created 24 chords which he named after the letters of the Greek alphabet which are used in the star charts. Cartas Celestes Nos. 2 and 3 followed six years later. No. 15, which closes out the first disc, was written in 2009, a year before the composer’s death. This takes us very far afield astronomically; subtitled “The Expanding Universe,” it begins 13 billion light-years from Earth with GRB090423, a supernova that was then the most distant known event in the cosmos, then runs through The Eskimo Nebula and the Pictor Constellation & Extrasolar Planet, a 21st century scherzo-like fugue. 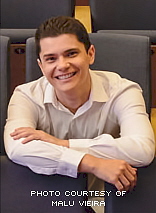 Pianist Aleyson Scopel seems to me perfectly suited for these challenging pieces. He has the kind of super-virtuoso technique it demands without sacrificing clean articulation or the creation of a musical line. It struck me as I listened to these extraordinarily pieces that Scopel must not have merely studied this music but lived with it for some time in order to be able to convey the complete mindblowing wholeness of it all the way he does. If you can imagine someone transcribing Holst’s The Planets for piano and then throwing in meteor showers, expanding and changing constellation shapes as well as nebulae and phases of the moon, you’ll have some idea of Prado’s accomplishment here. It takes a special kind of musical mind to approach this in such a way as to let one’s self go and become immersed in the total expansion of it all, and Scopel does this splendidly.

I should point out that the music is not always “formless” but, rather, contains moments of delicate melody, as for instance in the 11-to-13-minute section of Cartas Celestes No. 2. Indeed, one of the more interesting aspects of Prado’s pianistic universe is that occasional melodic fragments do coalesce from time to time, even if the underlying harmony is bitonal or polytonal. As I said earlier, there is an extraordinary sense of order in this music, and that is one of its chief glories. Even some counterpoint sneaks its way in here and there…Prado’s universe is not entirely messy or disorderly. It’s just that when things do coalesce, they are meant to feel spontaneous, as if they happened by accident.

Cartes Celestes No. 4, which starts the second CD, is the longest and most complex of the group so far recorded. After a crashing opening chord, the music eventually gravitates towards D major, with the ambient music swirling around much like celestial dust. Pianist Scopel’s liner notes explain that we “hear an Extragalactic Call three times, a ‘message of peace from other galaxies,’” and after evoking Pluto it ends serenly, “evoking that which is beyond our visible universe, a meditation into the unknown.” Prado introduces a “walking bass” line at the 13:35 mark before devolving into crushed chords and sonic sprinkles. Several long pauses within this piece give it the feeling of a multi-movement work. The latter section is particularly pianistic, utilizing the full range of the keyboard, repetitive notes and swirling figures to represent star nebulae.

No. 5 gives us his sonic snapshots of the two gas giants, Saturn and Jupiter, as well as the Milky Way and such constellations as Hydra the Water Snake, Ursa Major, Mosca and the Southern Cross. This piece is extraordinarily busy, full of hammered chords and madly-rushing keyboard runs. Much later in the piece, quirky rhythmic figures stimulate and drive the music in odd directions.

A strange series of ostinato chords open No. 6, which includes a portrait of Earth. The first section of this is, in fact, one of the busiest and least amorphous of the group. Sliding piano glisses traverse the keyboard from one end to the other and back again, followed by busy right-hand figures and crashing bass triplets. Eventually the music calms down, as in the other pieces, to ruminating figures with a lot of space between them before ramping up again with aggressive motor rhythms and staccato passages. It closes out on a series of aggressive, full-keyboard glisses.

My best recommendation for the new listener is not to play all of these pieces one after the other, as I had to do when reviewing them. Play one and stop the record; let the music sink in. Otherwise you will probably end up with sensory overload and not really appreciate all that is going on here.

As mentioned earlier, Scopel’s pianistic skills are extraordinary but it is primarily his intense identification with this music that makes the performances so great. I can’t wait to hear the next installment in this series!