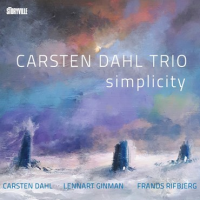 This is music that is swinging, engaging yet somehow profound, all at the same time.

Danish pianist Dahl, an acolyte of the late, great Thelonious Monk, has latched onto the one thing that Monk used often but not all the time, whereas Dahl does, and that is silence. Space. Not that he’s pulling your leg, pulling a John Cage on you. But he will stop playing for anywhere from a bar to a full break, letting what he has just played sink in before he picks up the thread and goes on.

There’s absolutely nothing dense or complex about this music; in fact, in terms of harmony or phrase structure, there’s nothing innovative about it at all. It’s not even as complex as Monk’s own Little Rootie Tootie or Four in One. But it’s lovely and it has substance. It draws you in, it doesn’t shut you out. You don’t even have to be a jazz lover in general or a Monk lover in particular to enjoy and understand what Dahl does here.

In addition to Monk, Dahl also apparently likes J.S. Bach, because he tosses a few little Bach-isms into Sing, Sing a Song as well as in Prelude and Blues (which sounds just a bit like Jacques Loussier), but the references aren’t overt or obvious. You have to listen for them; in fact, you have to listen carefully to everything Dahl does because it tends to be so quiet. Monk’s Skunk actually sounds more like Herbie Nichols than Monk, but what the heck. It’s all part of the ongoing tapestry of the recording. In The Surrenders Blues, Dahl departs from his Monk-ish style, giving us a sparse piece in C minor with only hints and suggestions of melody. Flying Birds is even sparser, if that’s possible, as is A Simple Waltz. On several of these tracks, you can hear Dahl humming softly as he plays.

Indeed, as the album goes further down its own road, Dahl’s playing becomes sparser. He started emulating Monk but ended giving you his own meditations on open space.

What’s really going on here is that Dahl is taking you, the listener, on a trip—a tour of his mind. And it’s a beautiful trip because it’s scenic without being disturbing. It’s the jazz equivalent of Zen meditation; each tune stays in a particular mood and frame of mind, exploring different little corners of his head room that you might not have noticed before. But there you are, in an alcove you never noticed. Wow. There’s a small crystal horse over there. Or an old book you never read before. How about that?

Bassist Ginman and drummer Rifberg skitter along almost unobtrusively behind Dahl. They support his musical meditations but do not comment on them. They are bystanders like you, except that they fill in some of the rhythmic gaps he leaves in his playing.

This is deceptively deep and expressive music. Not everything profound comes in loud, fast waves of sound.