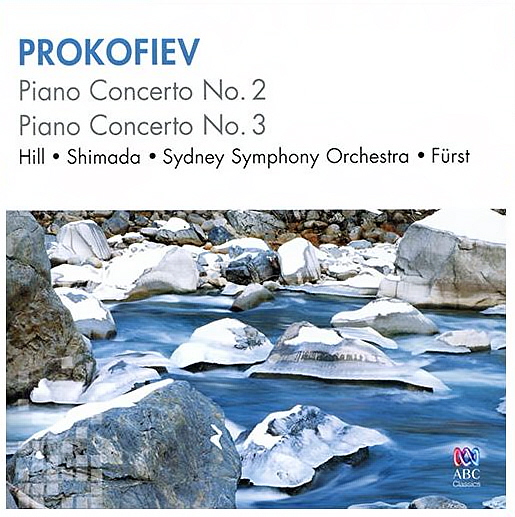 This is one of those “sleeper” recordings that crop up now and then, promising nothing really extraordinary yet delivering something quite special. I wouldn’t know either of these pianists, or conductor Furst, if I tripped over them in the dark. I’ve never heard of them in my life. Yet their performances here of these two Prokofiev Concertos—the ever-popular Third and the much lesser-known Second—are among the finest I’ve ever heard and well worth your checking out.

It would be easy to say that the performances are merely good, clean and professional, which is what I expected. It’s harder to admit that your initial assessment was wrong and that what you are hearing is outstanding. Perhaps Hill’s success with the thorny, more rambling second concerto is more of a surprise, but succeed he does. His playing is meaty, virtuosic and exciting all at the same time. In fact, I would place his performance of this music at or near the very top of recordings I’ve heard of the work. In addition to having a “big” technique, Hill also has a rich, deep-in-the-keys tone, drawing out some of the most splendid piano sound I’ve heard in many a year. He almost sounds as if he’s having fun with the music, which is difficult to achieve in a score this thorny, particuarly the huge, technically involved first-movement cadenza. Yet he pulls it off.

To a certain extent I must give much of the credit for this to conductor Janos Furst, whose idiomatic grasp of the score is beyond criticism. Furst knows exactly what this music is about; he brings out tremendous clarity in the orchestral part, always vitally important in Prokofiev, and imbues the music with both atmosphere and drive. These are live broadcast recordings from the Australian Broadcasting Company, yet the mike placement is perfect. Any studio recording engineer would be envious of the perfect balance achieved here between soloist and orchestra.

Indeed, because Furst is the conductor in both concertos, I would say that perhaps it was he who led the artistic vision from the podium. In any case, Shimada’s performance of the Third Concerto is simply fabulous, on a par with William Kapell’s legendary recording under Antal Doráti. It’s such a pleasure to hear a pianist and conductor work so well together as this. So many little details leap out at you that, after a while, you just lean back and relax, enjoying the involvement and interplay of these two splendid artists—and true artists they are.

Definitely worth your checking out!