Unlike most young people nowadays, I kind of grew up with radio programs. Most of the “classic” shows were off the air by then (the mid-1950s) or had switched to television (Jack Benny, Fred Allen, Fibber McGee & Molly, Burns and Allen), but I still heard about them and others, too (Lights Out, Inner Sanctum, The Shadow) and there were still some shows on the radio like Highway Patrol, You Bet Your Life (on both radio and TV!) and local New York-area shows like The Breakfast Club. So I had a pretty good knowledge of what had been on the air and what hadn’t. 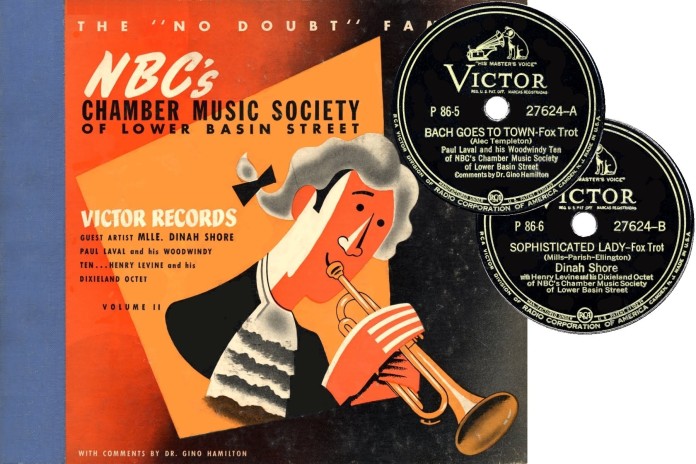 Imagine my surprise, then, to be in a Greenwich Village used-78-record shop in 1968 and seeing an album of records with a cartoon drawing of a guy in a powdered wig playing the trumpet on the front cover. The title of this was The “No Doubt Famous” Chamber Music Society of Lower Basin Street, and when I bought the records, took them home and played them, I was immediately in thrall of the bizarre, tongue-in-cheek description of the opening selection, the old ODJB standard Satanic Blues:

Greetings, music lovers! Welcome to a recorded concert of the no-doubt world-renowned Chamber Music Society of Lower Basin Street—than which…you won’t believe it ‘til you’ve heard it…right now Dr. Henry “Hot Lips” Levine and his Barefooted Philharmonic will play one of the earliest works from the literature of the American “jump”: the Satanic Blues. The work opens with a tailgate sludge-pump smear, and from there on is, to use a technical expression, “solid in the gutter”…er, groove. In true Dixieland style, each instrument then takes a chorus, Dr. Levine’s trumpet takeoff being just as Professor Nick LaRocca played it in the Original Dixieland Jazz Band.

Following which we got, indeed, a trombone or “sludge-pump” smear, followed by a hot Dixieland band. The introduction was obviously a farce, but the music was played straight. And this at a time when the Dixieland revival was still a few years away. 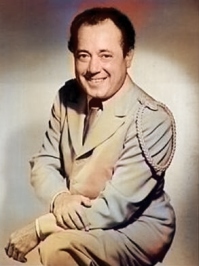 I was also enthralled by the imaginative, soft-grained arrangements of pop and jazz tunes by “Dr. Paul Laval and his Ten Pickled Woodwinds.” Laval’s real name was Joseph Usifer, and he made two rare recordings for Brunswick under that name in 1938 (The Jockey on the Carousel and In the Hall of the Mountain King), but it was The Chamber Music Society that made him famous. Almost a decade later, he added two letters to the end of his last name, became “Paul Lavalle” (to avoid being associated with notorious WW2 criminal Pierre Laval) and embarked on a lengthy career as director of the Cities Service Band of America, playing marches.

On the flip side of each jazz record was a pop ballad crooned by none other than Dinah Shore. I didn’t know she had gotten her kickstart to fame and fortune as a singer on this show. Many years later, when I finally got to hear transcripts of the original programs, I learned that none other than Milton Cross, NBC’s stateliest announcer (he was the voice of the Metropolitan Opera broadcasts from their 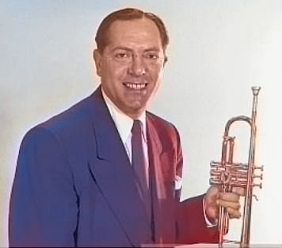 inception in 1932 until his death in the mid-1970s) was the emcee for the show, and that the voice I heard on the record—Gene “Dr. Gino” Hamilton—was the first announcer for Arturo Toscanini’s NBC Symphony broadcasts. Henry “Hot Lips” Levine was born in England in 1907 as Harry Lewis, and had actually replaced Nick LaRocca as first cornet of the Original Dixieland Jazz Band in 1928. Moreover, I also discovered that some comedians gave ersatz “musical lectures” in the course of each show. Two such comedians who got their starts on the show were Jackie Gleason and Zero Mostel. Dinah Shore left the program in late 1941 to be replaced by a series of chanteuses, among them Lena Horne, Dolores “Dodie” O’Neill and Diane Courtney, “the poor man’s Flagstad.” 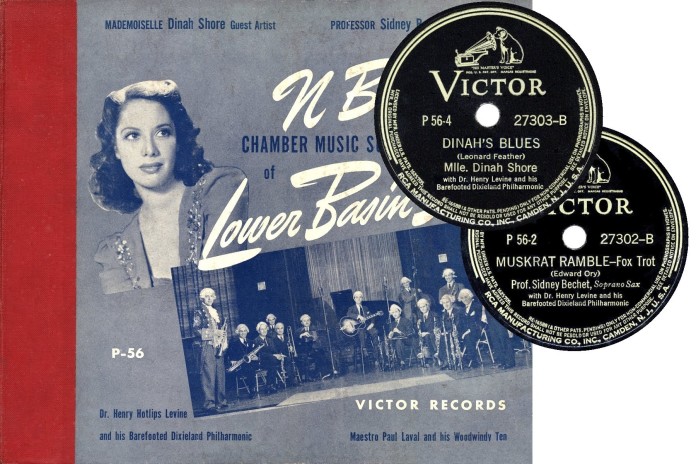 The show was a full-blooded parody of the stuffy “music appreciation” shows that presented classical music in a similar vein. It grew out of a quarter-hour series called Bughouse Rhythm and was described by Radio Life as “one of radio’s strangest offspring…a wacky, strictly tongue-in-cheek burlesque of opera and symphony.” Even Milton Cross got in on the act with his opening announcements, describing the musicians on the show as having “consecrated their lives to the preservation of the music of the Three Bs: Barrelhouse, Boogie-Woogie, and the Blues. Present with us on this solemn occasion: 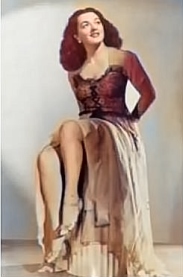 Mademoiselle Dinah (Diva) Shore, who starts fires by rubbing two notes together; Maestro Paul Laval and his ten termite-proof woodwinds; Dr. Gino Hamilton, as our chairman and intermission commentator; and Dr. Henry Levine, with his Dixieland Little Symphony of eight men and no!” Once the program began admitting a live studio audience, the musicians also dressed up in powdered wigs and 18th-century clothing. One of the great secrets of the show, which only studio audiences got a chance to see, was that the musicians in these two bands playing completely opposite musical styles were often the same. Alfie Evans played clarinet in both bands, Mario Janarro was the pianist, Harry Patent the bassist and Nat Levine the drummer, Tony Colucci (billed as “Prof. Antonio Respighi Colucci”) was the guitarist, while Rudolf Adler played tenor sax with Levine and oboe, English horn and clarinet with Laval.

In addition to the house band(s), the program featured a big-name guest musician and/or small band every week. Among the musicians who appeared on the show were the Lionel Hampton and Joe Marsala Quartets, Earl Hines, Jelly Roll Morton, Jack and Charlie Teagarden, Harry James, Benny Carter and Bobby Hackett. This cross-section of name jazz talent gave the show some stylistic diversity, though the musicians almost never spoke on the air. The program usually ended with Levine’s band playing Basin Street Blues. As Hamilton told listeners, “the closing opus is played in a Haydn Farewell Symphony arrangement, with the musicians leaving their stands one by one until the double bass player is finally left alone, dolefully drumming on his doghouse.” A final word from Cross: “As Dr. Gino Hamilton has so pointedly put it, at the end of each discussion, on such a matter as the matter just discussed, this is the National Broadcasting Company, RCA building, Radio City, New York.” Three chimes and out. 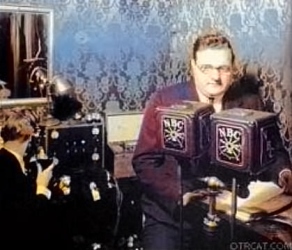 Musicians got the jokes (nearly all of them scripted by Welbourn Kelley) and appreciated it more than general audiences, who couldn’t make heads or tails of it. It wasn’t just because all the hip musical jargon was insider slang, but also because most jazz fans of the time weren’t used to polyphonic New Orleans jazz and the Laval arrangements were over their heads. When the radio ratings came in and showed the program polling third in that time slot, NBC announced plans to cancel it. Almost immediately, they were deluged with 20,000 angry postcards and letters from listeners saying that this was their favorite program and if they canceled it they would never listen to NBC again. It took years for the studio brass to learn that these missives came from 4,000 people, mostly musicians in New York, using different names and sending the letters and cards from mailboxes all over the New York-northern New Jersey area. Among the bon mots delivered by Hamilton (who also left the show in late 1941, replaced by Jack McCarthy):

There are those critics of the saxophone who say it is merely an unfortunate cross between a lovesick oboe and a slap-happy clarinet. To those critics we must say, “Kindly step outside with us a moment” and “Is there a doctor in the house?” 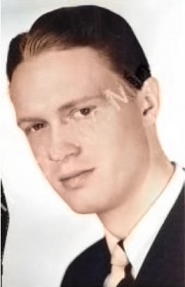 Even with the loyal following from musicians, CMSLBS went off the air in October 1944. Yet NBC mysteriously revived it in 1950 as a summer replacement for the Judy Canova program. Levine was back with a revamped dixieland eight, including former regulars Fletch Philburn on trombone, Harry Patent on bass and Nat Levine on drums, and new pianist, Frank Signorelli, with blues vocalist Martha Lou Harp. Each Saturday half-hour was presented before an enthusiastic studio audience. “Dr. Gino” Hamilton returned as host. The scripts, again written by Welbourn Kelley, had the same jazz slang couched in dignified language. British character actor Arthur Treacher was the guest commentator, delivering pompous dry humor. Comedian Orson Bean became the new and final host of the series in 1952, for a 13-week run. Bean caught the spirit of the series completely, delivering Kelley’s humorous scripts with his own New England accent and droll diction. He assumed the mantle of “Dr. Orson Bean,” assuming a professorial tone for Kelley’s prose, punctuating his remarks with exclamations, and muttering ad-libbed asides. NBC announcer Wayne Howell joined in the fun, introducing the Society’s chairman as “Boston’s half-baked Bean.” 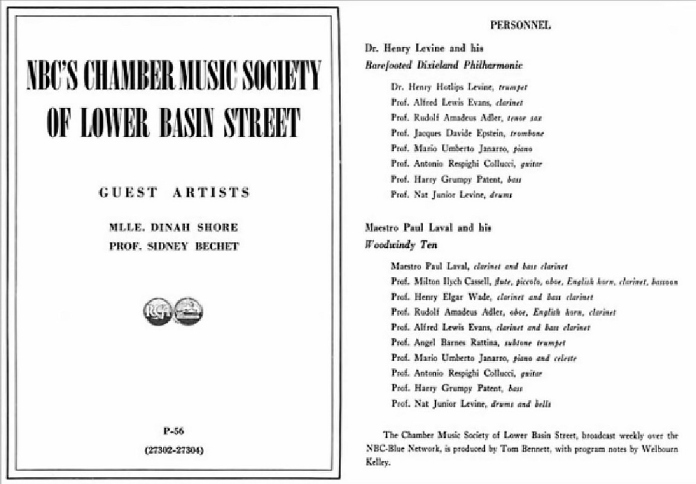 Nearly 80 years after it first hit the airwaves, many listeners are still not sure what to make of the show, yet it was because CMSLBS walked such a fine line between cutting satire and serious musical discussion that the show had such a devoted if limited audience. The majority of those tuning in probably hadn’t the slightest idea what the jokes meant or what the whole concept was really about, yet the show did its work well. Using deadpan humor and satire of upper-crust entertainment, it pointed out that despite jazz’s venues, this music was art, too.

Perhaps, however, it did its work too well, for a similar basic approach—with less humor and more seriousness—was co-opted by academics in music conservatories to show that rock music was art, too. Of course there are a few exceptions to the rule, but by and large it is only the minority of rock that is art, whereas it is the majority of jazz.

To appreciate the program, you really need to hear complete shows with all their inserted comments and the progression of musical numbers. Here is a link to five unedited programs:

Dig it, man. Bon appetit, or whatever.

Read my book: From Baroque to Bop and Beyond: An extended and detailed guide to the intersection of classical music and jazz

One thought on ““Greetings, Music Lovers…and The Rest of You, Too!””