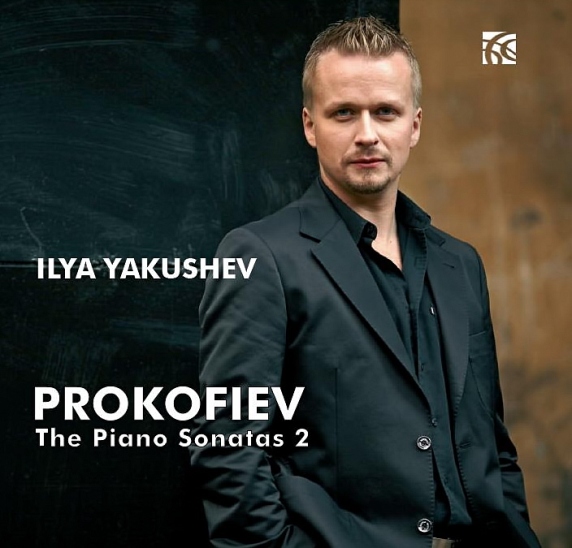 This is the second of Ilya Yakushev’s series of the complete piano sonatas of Prokofiev, the first being Nimbus 6267 which contained Sonatas Nos. 3, 6 and 7. The most famous series of these sonatas issued in the digital age comes from the superb pianist Yefim Bronfman on Sony Classical, although Michel Beroff has recorded them on EMI, Bernd Glemser has recorded several of them on Naxos, Alexander Melnikov is recording them on Harmonia Mundi, and Peter Jablonski is recording them on Exton (and this list does not include miscellaneous sonatas recorded by Glenn Gould, Sviatoslav Richter, Gary Grafmann and others).

As a pianist, Prokofiev himself favored consistently quick tempos with little room for rubato, rallentando, and other such devices favored by the 19th-century pianists like Rubinstein, de Pachmann, Paderewski etc., but he also preferred a surpassingly light tone, almost delicate compared to those who play his music now. Listen, for instance, to the way Prokofiev himself played his own Third Piano Concerto with the London Symphony conducted by Piero Coppola, then listen to any modern pianist (Bronfman included) play it, and you’ll hear tremendous differences in phrasing and articulation. That being said, his first piano sonata, written when he was 28, is essentially a short, one-movement bravura piece designed to show off technique more than anything else. It was only with the Second Sonata of 1912 that the more harmonically adventurous Prokofiev begins to appear.

That being said, I was amazed to hear Yakushov play that first sonata with much more dynamics contrasts and less slam-bang pressure on the tempo than Bronfman, despite the fact that he takes it a few seconds faster, finishing it in 6:53. Once again, and I cannot stress this strongly enough, it is a matter of phrasing and use of dynamics rather than just warp-speed technique. Yakushev certainly does not lack for the latter; in fact, his playing of the double-time passages in this sonata is, if anything, faster than Bronfman, but he very carefully separates the notes in such a way that the listener hears everything even when he recesses the volume. I also felt there was much more affinity to Prokofiev’s own style in his playing because there was much more lightness of touch. Advantage, then, clearly goes to Yakushev in this sonata.

I was a bit concerned about approaching the first movement of the Second Sonata because he takes it a half-minute quicker than Bronfman. Surely, this approach would kill the mood of the music and miss the point of Prokofiev’s carefully-notated phrasing and dynamics markings. Yet this doesn’t happen because of Yakushev’s consistent use of shading and nuance, which even at this quicker pace was much more detailed, and thus provided more contrast, than in Bronfman’s playing (and I generally admire Bronfman very much). Nearly every detail that the latter pianist brought out in his reading is brought out with an almost infinite range of colors by the former. I was in awe of Yakushev’s ability to consistently color the music without any sacrifice of drive or momentum. He does not lack for excitement—far from it—but he also seems to have tapped into the coloristic effects that one heard from the old-time pianists like Paderewski and Cherkassky. The effect is uncanny; he not only holds your interest but also enhances the music at the same time. I simply can’t get over it.

Needless to say, his treatment of the “Adagio” in the Second Sonata is almost magical, floating the music as if it were a piece by Debussy except with modern Russian harmonies. My overall impression is that Yakushev is the kind of pianist who works hard to achieve these effects, yet who also knows how to give the impression of spontaneity in his playing. This is a very rare quality, particularly nowadays when fast but soulless pianists rule the roost. In short, Yakushev has “IT,” that indefinable something that separates the very great artists from the “just OK.”

Aiding him in these performances is some absolutely splendid sound. The piano is recorded clearly enough that one can hear his most delicate impression, yet also with a bit of distance and ambience to soften his somewhat more percussive attacks. And Lord knows, Prokofiev reveled in percussive attacks!

Needless to say, Yakushev is also masterful in his performance of the Sonata No. 9, particularly in the long and delicate “Allegretto” that opens the work. Here he displays the full range of his tone and coloristic effects, presenting the music like a rich feast to be savored. It is quite an achievement, as is his evident delight in the playful “Allegro strepitoso” which follows. He also makes effective contrasts in the third movement, where the “Andante tranquillo” suddenly explodes in the central “Allegro” section.

All in all, then, a major surprise and a great representation of these sonatas. For once, they made sense to me as music rather than just flying past one’s ears as a series of notes. Highly recommended!