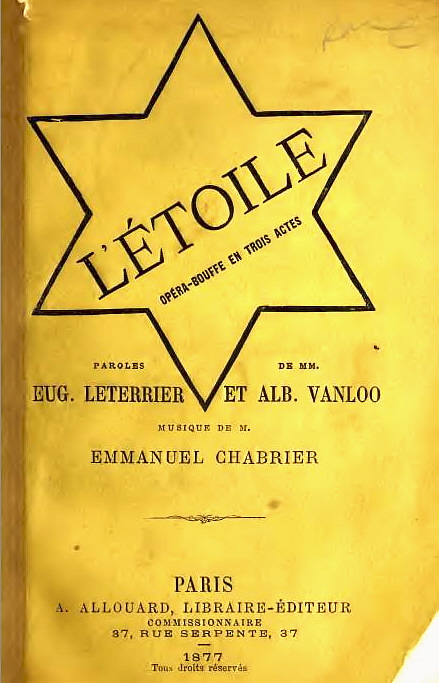 For those of you who love, as I do, Emmanuel Chabrier’s wacky but sophisticated comic opera L’Etoile (see my previous article about it here), but have been stymied in trying to find a free online libretto–or any libretto at all, since the only studio recording (on EMI) hasn’t had a libretto link available for years–your patience has been rewarded. Working for more than a month using Google translate, and then smoothing out the badly-translated lines and passages by tweaking the verbiage with a French-English dictionary, I’ve finally been able to cobble together a workable, mostly readable English translation. Yes, a few lines or words here and there may look odd, but they were translated directly from the original libretto as published in 1877 (see the cover image above).

In my original article I gave a link to an Adobe PDF file at the Internet Archive of this original French libretto. One of the problems with this libretto, however, is that it included ALL of the spoken dialogue originally written…but close to a third of it was crossed out in pencil, ostensibly by someone who attended a performance and realized that a lot of it was no longer being spoken in actual performance. I would go even further: modern performances of the opera cut even more dialogue, for the simple reason that it’s too long and drags out the performance time. (I honestly believe that this was one of the reasons that contributed to its only running for 58 performances.) I make no excuse for the fact that I’ve left all the dialogue in the English translation. Even if you probably won’t hear most of it in performance, it gives you a good idea of the original libretto by Eugene Leterrier and Albert Vanloo. Granted, some of the French puns used in the original text don’t translate properly into English, but I still think the libretto is pretty funny as is.

As a bonus, I’ve also typed out the complete French libretto so that it can be read more clearly and converted that into an Adobe file, too. In both the French and English versions, I’ve put the sung text in black print and the spoken text in dark red (it may look “rust” on your computer, but you get the idea.)

So here they are, Chabrier fans: the libretto in two versions, French and English.

And thanks for your continued enthusiasm for my website!

One thought on “Libretto for Chabrier’s “L’Etoile” Now Available!”