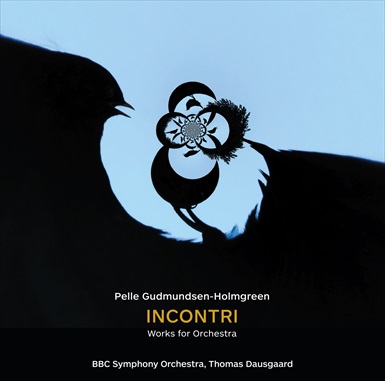 Pelle Gudmundsen-Holmgreen, who died this past June 27 at the age of 83, had a lifelong fascination with the absurd, but unlike his American counterpart John Cage he didn’t pretend to be otherwise in the hopes of deluding critics and listeners into taking his music seriously. He liked being absurd; it was who we was. “I have created some of the ugliest works ever made in Denmark,” he said in 2006; “I have succeeded in making both professionals and laymen cringe.” Oh, would that Cage were half as honest!

But if his music is so “ugly” and “absurd” that it makes people cringe, why is it still being played and recorded? What was its point? The answer comes in the listening. It is absurd, yes, but it is absurd in a humorous way, and it is fascinating in texture as well as interesting. Andrew Mellor, who wrote the liner notes for this release, put it this way: “He has purposefully devised his own systems of limited means, as the three works on this recording demonstrate with an imagination that is truly unlimited.” Or, as Ursula Andkjær Olsen put it in an online article, “In the great majority of his works, Gudmundsen-Holmgreen cultivated a quite special precise ambivalence which allows his music to snarl at itself, to tell itself to shut up, even if it nevertheless sounds and is present. His musical world contains many contradictory phenomena… simplicity and clarity in motifs and structures combined with an anarchistic antipathy to large-scale ‘rounded’ forms.”

Gudmundsen-Holmgreen’s music, above all else, is impressionistic. It creates moods, and that is something that John Cage did not and could not do. Cage’s absurdities were so much “in your face” that there were only two reactions you could have to them: recognize the absurdity and laugh at them or, what normally happened in the Halls of Academe, have Learned Professors pull on their chins and opine that this was music too deep to be understood, which was Cage’s intent. For better or worse, Gudmundsen-Holmgreen never tried to con anyone.

Thus in Mirror II, what we hear is the slow progression of sounds, not necessarily with a lot of space between the notes but rather with a legato feel to the music, sparse though it is. Occasional long-held brass notes—mostly on E-flat and the C below—are heard amidst a sprinkle of percussion instruments while tuba and string basses sustain a cavernous contrabass E-flat underneath. Eventually, the horn begins playing a slow-moving, dolorous melody, but soon gives up and falls back to the repeated E-flats and Cs. A clarinet, however, decides to go off on its own melody, with the horn adding sparse commentary.

But is the sound file I downloaded pitched incorrectly? In the liner notes, Mellor insists that Mirrors II “only allows itself use of notes from two symmetrical outward sequences emerging from a central axis (the D above middle C), 21 pitches in all.” Yet my pitch pipe clearly says E-flat. It’s an old pitch pipe, but it’s never failed me in 35 years. And it’s not just my description of the music that Mellor hears; he obviously has fallen into the Learned Professor chin-pulling mode that has so screwed up normal people’s enjoyment and understanding of classical music. Quoth Mr. Mellor: “If the works on this disc represent a journey to complete chromatic freedom, Mirror II is the most incarcerated… The tone grid itself describes a journey from chromaticism to the diatonic, pentatonic and the triad. Melodic material can effectively only arise from the middle of the spectrum where there are variably spaced notes.” Say what? This is inflated B.S.

Mirrors II becomes far busier and less floating in the subsequent sections; in fact, by the time we reach parts III through V, we are in the midst of a boiler factory. (Some of it put me in mind of Raymond Scott’s wacky tune Powerhouse, in mood if not in actual notes and form.) A descending trombone lick, borrowed from Stravinsky’s Sacre du Printemps, repeats itself in section IV; in section V we reach the “powerhouse” itself, with machine-like “chunking” sounds in the percussion combined with growling trumpets. In section VI, the chunking percussion slows down but does not lessen in volume; the orchestra, however, does quiet down, eventually leading to a percussion-less violin solo with the trombone lick occasionally coming up in the background. Welcome to the “absurd” sound world of Pelle Gudmundsen-Holmgreen!

The 1977 Symphony, Antiphony, written as a Prelude followed by six movements, uses a slightly wider range of notes but clearly inhabits the same sound world and even the same use of instruments, beginning with piano and percussion before the winds and strings begin scurrying across the soundscape. I liked the way Gudmundsen-Holmgreen introduced syncopation in the Prelude, so much so that it almost acquires a feeling of jazz “swing” in the first movement. The first movement (which follows the Prelude) begin very quietly, with a solo violin playing a fast passage with the edge of the bow on the strings, in an almost minimalist vein. The other violins pick up this motif as the splashy percussion comes barging into the picture; violas play pizzicato while brasses smear notes in the background. This work is, clearly, meant to not only be absurd but to make the listener laugh at its absurdity. A slap-bass is heard in the second movement, along with an Italian-sounding mandolin playing fast picked notes. The whole thing almost sounds like Leif Segerstam after a busy evening of drinking. In the third movement, the piano dominates, clearly paying tribute to Stravinsky’s Ragtime while the orchestra has merry fun around it. The percussion, by this time, is going bonkers, creating its own rhythm independently of the rest of the orchestra. Get into the kitchen and rattle those pots and pans! If you can’t laugh at this music, you have no sense of humor. This is Spike Jones or Peter Schickele on steroids. But I’m sure the Learned Academics would be sitting in the audience, pulling on their chins, and asking themselves, “But what does it all mean?” (“It don’t mean shee-it,” quoth Mr. Natural.)

In the fifth movement, everything quiets down and we are left with the solo piano picking out a few forlorn notes…the hangover over the party, I think. Eventually we hear a high violin whining drone notes to complement the piano. The last movement is probably the strangest because it sounds…normal. Violins play a lovely melody, interrupted occasionally (but not often) by a sudden outburst of volume. Then, as suddenly as it stopped, the strange sounds begin again, the slapping percussion and the growling brass, but not as loudly. The strings are trying to take over the proceedings, but the nutty sounds of the previous movements have woken up from their drunken stupor and are getting one last lick in. The Italian-sounding mandolin also returns. A few horn beeps, simulating car horns, complement the crackling percussion. Low strings now begin to play in an edgy manner; the melody set up at the beginning keeps trying to re-establish itself, but to no avail. Like it or not, the absurdity wins out.

Incontri comes from a live performance given at the 2012 BBC Proms in the presence of the composer. I’m not sure if that means anything to anybody, but I pass it along for what it’s worth. Here is a work that is chromatic from start to finish, sounding like some of Segerstam’s more serious works. (I wonder if Gudmundsen-Holmgreen was influenced in any way by the Finnish composer? It sounds a bit like it to me.) The composer wrote, as a preface to the score, that “In a forest, different kinds of birds continue their territorial song without yielding or altering their signals.” So think of this as Bird Wars or something very much like it, augmented by sinister-sounding brass and strings. A bit of Mussorgsky’s Night on Bare Mountain makes its way into the string writing; these are some MEAN mother birds, let me tell you! Not only aren’t they yielding to each other, they’re fighting for turf. The writing for trumpets later on in the score used chromatics, triplets, and growling. Some of the syncopations here reminded me of the Sharks and the Jets fighting in West Side Story. A Gene Krupa-like drum solo erupts, shutting out the rest of the orchestra for a while.

The strings come back, playing agitated figures; the clarinets are all a-flutter; the percussion bangs away. Then suddenly, calm engulfs the scene. Have the birds succeeded in killing each other? No, they just retreated in order to regroup. And here they come again, bashing their beaks against each other, fighting for their piece of turf…yet the piece ends quietly once again. I’ll bet you the ravens won. Ravens usually win because they’re bigger and stronger than other birds.

Thus we come to the end of this particular journey into the world of Pelle Gudmundsen-Holmgreen. It’s certainly different, to say the least!