The ongoing creative growth of young jazz phenom Joey Alexander, who is no longer a precocious 11-year-old but has now reached age 13, is captured in this second CD. Having read of his influences and preferences, I was not surprised to see the music of John Coltrane, Herbie Hancock and Wynton Marsalis in this recital, but I was more than a little surprised to find him tackling Thelonious Monk and doing so with wonderful alacrity and equally surprised to see him trying his hand at writing his own tunes.

As I mentioned in my earlier article on Alexander, “Each chorus is not only well constructed in and of itself, but builds on the chorus(es) preceding it,” and this is even true in his own compositions. City Lights is an uptempo bop-style piece, built around adjacent chord positions, primarily modal and more interesting for its rhythmic and harmonic divisions than for its melodic material. But it’s a good enough beginning for this recital. Sunday Waltz, which follows immediately, has a strong Gospel feel to the introduction before moving into an almost Bill Evans-ish mood (the changes reminded me of one of Evans’ favorite tunes, Little Lulu) yet with a return to that Gospel feel near the end of each half-chorus. It’s amazing to hear how he improvises, moving both the rhythm and the melodic fragments around the keyboard, using very little pedal, keeping a crisp sound as he moves through the music. Alexander has told Reuters, “I don’t think I’m a genius, I’m just thankful for the gift that jazz has given me,”[1] but what 13-year-old pianist do you know who can play jazz this well? And not just the digital dexterity, but the musical ideas—and more importantly from my perspective, the enthusiasm? As Alexander stated further, “In this music, it’s not just technique, it’s the feeling of how you play and the freedom you can give…and I do a lot of listening, actually.”

Coltrane’s Countdown begins with a drum outburst by Owens, followed by a bass solo from Grenadier before Alexander comes into the picture, almost immediately reducing the tune to two-finger right-hand tremolos, followed by asymmetric chords in both hands, then more tune fracturing a capella before settling into the tune proper. This is pretty amazing splaying for a pianist of any age, but especially considering Alexander’s age it is simply phenomenal. He makes a real Bud Powell-style bop piece out of it, and although he doesn’t quite have Powell’s blazing speed he challenges the legendary pianist in terms of sheer musical invention. I’ve heard many an adult, seasoned pianist who couldn’t make as much of the music as Alexander does here. Indeed, as the music is dying away, one of the musicians is heard to say, “Joey, you really played your butt off on that!” Quite a compliment from a seasoned professional!

Perhaps the most surprising track on this album is Charlie Chaplin’s evergreen, Smile. Alexander consistently brings out the melody, but as chorus follows chorus he deconstructs it a little more each time, in the process tossing in a snippet from Over the Rainbow which he even uses at one point as a countermelody in the left hand. This points up another of his more phenomenal talents, the ability to use his left and right hands independently at times, as if two different pianists were playing. Interestingly, this tune is played solo, with no bass or drums.

Chris Potter, on soprano sax, joins the trio for Hancock’s Maiden Voyage, which Alexander takes in a very relaxed fashion. Here he is content to sit back for extended stretches and act as an accompanist, a role I’m not sure he has had a lot of experience in doing, yet he succeeds beautifully. Interestingly, at about 3:40 he plays a little figure on the piano that Potter picks up on as the beginning of his own solo, and as he goes on Alexander becomes busier and more overt in style behind him, pushing Potter on to some extraordinary playing. Interestingly, when Alexander goes into his own solo (around 5:57), he is relaxed and spacious, playing single notes in the right hand with occasional chords interjected here and there, more for light emphasis than anything else. Yet as his solo moves into its second and third chorus, he becomes busier and more energetic, picking up the pace and really generating some tremendous momentum. And as usual for him, he completely rewrites the piece, making a new composition or contrafact of it. You simply can’t play this well at this age unless you really know your music, and although Alexander is self-taught he certainly picked up on harmonic cycles extremely well. 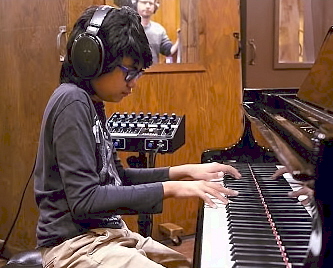 I personally loved the way Alexander played Monk’s Criss Cross. Too many pianists nowadays who play Monk “smooth out” his offbeat rhythms, making it smoother than the original. Alexander does not; he evidently loves the screwy backbeats and motifs repeated in the “wrong” sequence within Monk tunes and relishes the chance to play it. The rhythm section almost makes a rumba out of it in places, which adds to the fun, and the whole trio just kicks back and enjoys themselves. I think Monk would have approved of this rendition, something he rarely did when others played his music.

Another surprise is Billy Strayhorn’s 1941 classic, Chelsea Bridge (though the issued recording was made in 1942, there’s a September 1941 alternate take with Jimmy Blanton on bass). Part of the surprise, again, is Alexander’s rhythmic treatment, starting with a surprisingly good Duke Ellington imitation on the intro before turning it into a Latin dance number (except for the B theme in the middle). I really liked this because it did not follow the pattern that most pianists do when playing this, which is to make it a sort of mushy ballad. KIn his solo, he deconstructs the piece to its basic building blocks before embarking on a solo in straight 4 that harks back to the swing era. This young man has so many surprises up his sleeve, it’s hard to predict where he’ll go with almost any tune in his repertoire.

Wynton Marsalis’ For Wee Folks is a modest tune in a relaxed tempo, yet once again Alexander has a way of playing it differently from how you might expect, here fractioning the beat in a slyly syncopated manner, adding a few crushed chords, and just plain enjoying himself as he wends his way through the music. He brings the tempo way down as the bassist plays arco behind him, them switches to plucked notes as they switch to a nice walking tempo. Eventually Alexander and Grenadier engage in a nice loping duet conversation, the bassist taking over the comping duties so that the pianist can concentrate on just his right hand. Interestingly, Alexander evokes Ellington once again in some of the flourishes he plays in the beautiful, extended coda.

Another Alexander original, Soul Dreamer, closes out the album. Like his other pieces, the melody is casually constructed, the meat of the music being the way he is able to link harmonies together. This is another relaxed piece but a very inventive one, with Alexander evidently enjoying his exploration of his own harmonic sequence. Eventually, I’m sure he will mature as a composer, just as this CD shows him maturing as an improviser, but in the meantime what we take away from his playing is enthusiasm, a sheer love of playing that you don’t always hear in more seasoned professionals.

Countdown would be an excellent album for almost any jazz pianist nowadays. For a young man of Alexander’s age, it is simply amazing.

Read my book From Baroque to Bop and Beyond: An extended and detailed guide to the intersection of jazz and classical music

One thought on “Joey Alexander’s “Countdown””