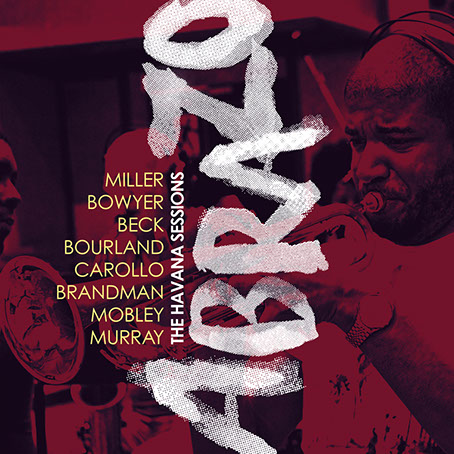 This album was recorded, with great enthusiasm, in the wake of the United States’ naturalization of relations with Communist Cuba. I shall refrain from commentary on the political ramifications thereof and stick to a description of the music. In its physical form the album is on two discs, but these two CDs contain music of varying and, to an extent, almost opposite forms, the first being primarily jazz and the second largely classical works.

The first two selections, written by Timothy Lee Miller, are the most conventional in form. This is Latin jazz of the sort that we have been hearing since the 1950s. The tunes are pleasant but relatively uninteresting; on the other hand, the solos are simply terrific, and thus are the raison d’être for their presence here. The third track, Don Bowyer’s Bugs & Gas, is rather more interesting in texture and form, more like a modal piece with Latin rhythm. It was commissioned in honor of Don Spina, who retired from a career spent decommissioning biological and chemical weapons, called “bugs and gas” by those in the field. Ironically, in this piece one of the soloists, the trumpeter, does not play within the structure of the tune but rather just runs changes and flurries of notes.

We then reach the two suites by pianist Bunny Beck, one of the more interesting and intrepid of women jazz composers nowadays. In the instrumental suite she creates long lines that develop and occasionally interlock, with interspersed solos, and her style is all her own—I couldn’t think of one jazz composer who writes just like she does—and the soloists are all listening to the developing structure and thus provide interesting music that adds to the pieces rather than disrupting them. One particular device that I noted here was the use of trumpet triplets against the continuing Latin rhythm, which Beck told me was the contribution of arranger Juan Manuel Ceruto. Interestingly, she turns over the piano duties here to Cuban musician Rolando Luna rather than herself (none of the composers play here in their own works), and it is in this underlying piano part that some of the more interesting music is found, a sort of Latin basso continuo except when he takes a solo. In the vocal suite the band is aided by singer Will Dailey, whose voice was dubbed in at a later session (according to the liner notes). To be honest, the lyrics aren’t particularly interesting, but what is interesting is the manner in which Beck uses the voice as an instrument in the ensemble. Dailey’s singing put me in mind, a bit, of Bob Dorough’s with its light, non-vibrato sort of delivery. The music itself os an outgrowth and continuation of the instrumental suite, here using the voice to sing the triplets above the rhythm while the trumpets, when they do play, explore other rhythms.

Disc 2, as noted earlier, is an entirely different animal, starting with Roger Bourland’s Alarcón Madrigals, Book 3, commissioned by the Los Angeles women’s chorus Vox Femina in 2006. This is extraordinary a cappella music, evoking early music yet in a modern vein, sung fairly well by Vocal Luna. Alas, the lyrics are not provided in the CD notes or the online notes, but I was finally able to dig them up on Bourland’s own website here.

John A. Carollo’s Burlesque is an entirely different animal, a rather curious five-part trumpet-guitar duo employing some jazz techniques, particularly in the trumpet part (tremolos or “flaps” and muted passages) and spiky harmonies in the acoustic guitar writing. I was really impressed by the superb control that trumpeter Fadev Sanjudo Rodriguez had of his instrument; this is deceptive music that sounds much easier to play than it really is, particularly in the graded dynamics, and Rodriguez did a superb job. The extended online notes tell us that this piece “is a story about a woman, Rosa, who learns about music from a guitarist and a trumpeter, Luca.” I found it interesting that Carollo has primarily written for the piano; except for the fact that the two parts here dovetail well, I wouldn’t have suspected that he had not previously written for this combination of instruments!

Margaret Brandman, who has written both jazz and classical pieces, here contributes the brief, four-part suite Warm Winds in Havana for a chorus of four saxophones (soprano, alto, tenor and baritone) with percussion. Here’s a piece that bridges the gap between jazz and classical in the most complete way, wedding an unmistakable Latin beat in both the percussion and the sax quartet with strict compositional form. Each of the four pieces in the suite is less than two minutes, the first being barely a minute and a half, but Brandman says everything she wants to say without making the listener feel short-changed. Oddly the second piece, titled “Sauda del sol” or “Sunrise,” put me in mind of some of the saxophone writing one heard from Pete Rugolo during the Stan Kenton band’s heavy Latin period, and “Danza del día” (“Dance of the day”) dispenses with the percussion to produce a light, lovely, skimming sort of swing generated entirely by the reeds within a framework of a tune that barely develops harmonically, creating a hypnotic effect.

Coloring With Water was provided by Michael Murray who, the notes tell us, has written “orchestral, band, chamber, choral, and electronic music, and frequently collaborates with dancer Tina Mullone, working to break down the barrier between dancer and musician.” This is an unaccompanied piece for trumpet, trombone and French horn that skips and dances, the Latin rhythm being somewhat subjugated and at times broken up into little jabs of a beat (at one point disrupted entirely into a sort of back-beat counterpoint!) as the three instruments play, generally with the trumpet and horn in thirds against the trombone.

The second disc, and the album, ends with Michael Murray’s After the Fall, one of a seemingly endless stream of compositions commemorating 9/11 and its aftermath. The music here is, understandably, subdued and elegiac in character, sung by an a cappella choir. Schola Cantorum Corolina is a superb group, rich and full in tone while paying great attention to dynamics shadings, giving us a moving performance. As a composition I found it interesting if not particularly original in form, moving in its own way.

Despite the compositional weakness of the first two tracks, this is the kind of album I always enjoy, one which combines jazz and classical pieces side-by-side to produce an interesting and challenging aural experience. I recommend it!

Read my book From Baroque to Bop and Beyond: An extended and detailed guide to the intersection of jazz and classical music