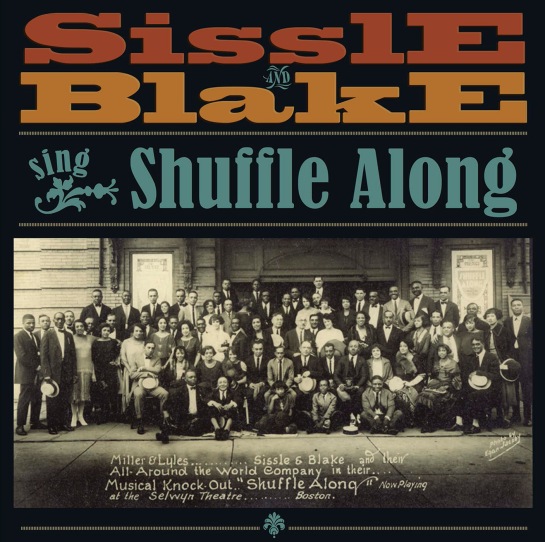 This fascinating release combines original recordings made in the acoustic era by members of the Shuffle Along company in conjunction with later performances, primarily by Noble Sissle and Eubie Blake, who wrote all the music and lyrics. It is, of course, by no means perfect, but it is representative of what was considered a landmark show in the history of black theater and the first “jazz” musical to hit Broadway.

But first, some prehistory is necessary for us today to understand what Shuffle Along was all about without having a PC meltdown. Young people coming to the show for the first time will undoubtedly blow a gasket (or several gaskets) over the premise itself. Based on an older skit by Flournay Miller and Aubrey Lyles titled “The Mayor of Jimtown,” it’s filled with horrid racial stereotypes, but one must remember that this was the era when racial stereotypes were de rigeur in show business—and it was not confined to black Americans. “Greedy Sheeny Jews,” “Dumb Irishmen” and “Sneaky, Oily Italians,” all speaking broken English, were rife in the show business world of this time. Indeed, we often forget that even the now-revered Marx Brothers molded their characters on exactly these kind of stereotypes (believe it or not, Harpo’s original name in the act was “Patsy the Irishman,” his glaring red wig covered by an Irish-type hat), the difference being that as the act evolved, the Marxes revised their characters to subvert white middle-class society rather than be subservient to them or play the dolts.

The plot of Shuffle Along features two protagonists, played by Miller and Lyles, as owners of a grocery store who decide to run for mayor. Their deal is that whichever one wins will hire the other as Chief of Police. They both steal money from their own cash register to buy votes and hire the same private detective to catch the other doing the stealing. They finally resolve things in a rousing, humorous 20-minute fight scene. As they fight, their opponent for the mayoral position, Harry Walton, vows to end their corrupt regime, underscored by the song “I’m Just Wild about Harry.” Walton wins the election and the girl, running Sam and Steve out of town.When the show opened at the Howard Theatre in Washington, D.C., in late March 1921, critics decried the appalling stereotypes but highly praised what was most important: the music, singing and dancing. The incredible “speed” dances given by the performers and soprano Gertrude Saunders’ powerful (if terribly unsubtle) voice bowled over theatergoers, as did the “jazzy” score of Blake and Sissle.

Singer and lyricist Sissle was originally a drum major and vocalist for Lieutenant Jim Europe’s “Hellfighters” 369th Infantry Band in World War I. He was present at the rehearsal in which Europe was stabbed in the neck by Herbert Wright, one of his drummers, which severed his jugular vein and caused his death, and during those months in the War he recalled Europe talking to him about his dream of creating all-black shows on Broadway and perhaps a “jazz symphony.” Of course, Europe, like many musicians of his time, had only a rudimentary idea what jazz really was. When they entered the service and went overseas, not even the Original Dixieland Jazz Band had yet made an appearance in New York. To them, jazz was what we now call “hot ragtime.”

Nevertheless, Shuffle Along remains a vitally important historical moment in the history of black entertainment. It was the first all-black show to have a wide appeal to white 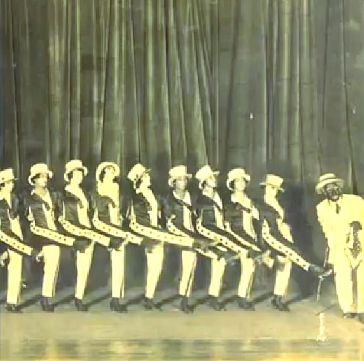 audiences, first gaining attention at the Howard Theatre in Washington for two weeks, then moving to the 63rd Street Theater in New York City in May before racking up 504 performances(!) at the Cort Theater on 48th Street. The cast included several names that would become famous over the next few years such as Adelaide Hall, Florence Mills (who replaced Gertrude Saunders after the first year), Fredi Washington and Paul Robeson—none of whom recorded anything from the show!—and a very young Josephine Baker in the chorus line. The big mistake Sissle and Blake made was trying to revive the show, twice in fact, in 1932 and 1952. The second time, they only got four performances in before the show closed, but ironically RCA Victor had already rushed to record four songs from the show and issued them on LP!

This album contains only a few of the numbers issued back in 1975 on the New World label, which relied mostly on original recordings. Gone is the “overture,” which included the hit tunes Bandana Days and I’m Just Wild About Harry, Gertrude Saunders’ rendition of I’m Craving for That Kind of Love, and several others. There are several private recordings of Sissle and Blake performing numbers from the show, recorded in the 1950s and early ‘60s, although no recording dates, or information of any kind, is given in the booklet. One important note that should be made, and is often overlooked, is that the show’s score was orchestrated and arranged by Will H. Vodery, an accomplished musician with classical training who later in the 1920s helped tutor young Duke Ellington to the principles of composition.

The bottom line question, however, is whether or not Shuffle Along is a work of art of simply an entertainment that happened to luck out in its time. I would opt more for the latter, but with a caveat: although overall the music is not jazz, Blake as a pianist played a style of hot ragtime that was very close to it. Anyone familiar with his signature tune, the Charleston Rag, will know what I’m talking about; even his “hot” arrangement of Sousa’s Stars and Stripes Forever still holds up today. Within the context of the show, Blake apparently played occasional hot choruses during performances, and you can hear this particularly in the later recordings where he breaks out of the ragtime mold. Thus it is the music itself that lives; we can forget the moronic and racist plot. 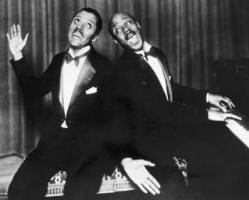 And indeed, this is the virtue of hearing as many of the original recordings as possible. They capture an almost irrepressible energy force that is seldom heard in old records; the music jumps, cavorts and seduces all at the same time. Primary among the virtues of these recordings is the voice of Sissle himself, a high, bright tenor with superb diction, intonation and brio. With such a voice and his handsome good looks, Sissle could easily have become a superstar in the same vein as Al Jolson or Eddie Cantor had he not been black. Even more interestingly, Eubie Blake’s hot New York ragtime style is actually a lot closer to jazz (at least in rhythm if not in improvisation) than we may remember, particularly if you only heard him in his late years when he was the “old black darling” of TV and Broadway. Blake always maintained his enthusiasm of playing but the actual style, his continuity of phrasing, declined after the early 1960s.

As I write this, there is a new Shuffle Along scheduled to open on Broadway on April 28, but from what I’ve read about it, it is not the same show but a show about the show. Some of the original numbers are included, but not that many; a lot of new material has been inserted. We’ll have to wait and see what it sounds like.

In the meantime, however, this CD is a pretty good indicator of what the show was like. One online critic complained about the juxtaposition of original recordings and later tapes made by Sissle and Blake in the 1950s (and two numbers, the Shuffle Along Medley and Love Will Find a Way, taped by Ivan Howard Browning and Eubie Blake in the early 1970s), claiming that hearing the modern recordings in context was “jarring.” I disagree to a point. Most of the Sissle-Blake tapes are extraordinarily lively, and in fact we hear in these some of Blake’s absolute best playing that was very, very close to the stride piano style of James P.Johnson. Yet I do miss some of those original recordings, not because I’m obsessed with old acoustic discs (I’m not) but because the flavor and energy in those original records is missing from most later recordings. Thus I would recommend the following additions and substitutions:

Gertrude Saunders was a highly unusual singer for Broadway music, then or now: a full-throated lyric-spinto operatic soprano. Her voice was somewhat steely and had a bit of unsteadiness to it, which makes the numbers she sings sound a bit too much for the music, but the sound she made was actually quite thrilling and, in my opinion, there has been nothing like it in jazz or blues since. I first heard her rendition of I’m Craving for That Kind of Love about 40 years ago on a Columbia LP compilation called The Sound of Harlem, Vol. 3 (CL-33), and I never, ever forgot it. Yes, at first listening it sounded horrid to me, but oddly enough, it grows on you! Florence Mills, who replaced Saunders after the first year, was said to have been far superior in these songs, but for whatever reason Mills never cut a single record before her shocking early death in 1927.

The recording of Gypsy Blues noted above is by an all-white band (and one, please note, with Jimmy Durante on piano!), but the performance has a much hotter, real jazz-like feel than some of the records from the show. And now I realize why it was so difficult for archivists to collect all the original cast recordings from Shuffle Along in one place: they were all made for different labels, both big and small. Victor, OKeh, Emerson, Pathé, etc. (not to mention Eubie Blake’s Shuffle Along Medley made as a piano roll for QRS). To find them you had to be a real sleuth and/or know who recorded for what label to begin with (although the Eubie Blake/Shuffle Along Orchestra titles were Blake’s only recordings for Victor, so you had to know that too). 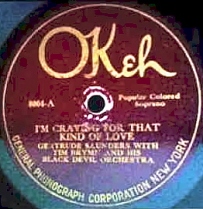 For the most part, what is here is really fascinating and engaging. Even some of the comedy routines are still pretty funny, such as the fight scene where one of the protagonists says to the other, “I thought you said you was a professional fighter?” “I is a professional fighter!” is the reply. “You IS? Then why ain’t you stoppin’ those punches?” “I is stopping them…all of them! You don’t see any of them getting past me, do you?”

All in all, then, a fascinating album that, despite its eclectic mixture of old and later recordings and lack of liner notes, represents an important milestone in the history of ragtime and early jazz.