In 1937, one of the hottest and most active years of the Swing Era, all of the biggest and most famous bands played hot, heavy and loud. Benny Goodman. Count Basie. Jimmie Lunceford. Bunny Berigan. Chick Webb. All of them powerhouse bands with brilliant trumpet sections, heavy saxes and pounding drums. And then, out of nowhere, came a strange little sextet that sounded nothing like them—in fact, they didn’t sound like anyone else. Their music, though swinging, was soft, cool, low-key and technically intricate. This was the John Kirby Sextet.

Previously, Kirby had played trombone and then the bass, and with the latter instrument he had played for several years with the Fletcher Henderson orchestra, but he was only really known to other musicians. The sextet he formed in 1937 was his own baby, his own creation, and it was something entirely different from anything else in the world. In fact, if you ever find original 78s by the Kirby band and play them, you’ll probably be scratching your head as I did the first time I heard them, wondering how cool jazz of the early 1950s came to be in the late 1930s.

The answer was something Kirby—a handsome but introverted and somewhat surly presence—rarely discussed. He wasn’t very open about his past to start with, probably because his childhood was so hard. Born out of wedlock as John Kirk in Winchester, Virginia in 1908, his mother Dolly gave him up for adoption. John was raised by the Rev. Washington Johnson and his wife, Nancy, and went to the Winchester Colored School where he learned to play the trombone. In later years, after his success, he told a reporter that Bach’s work “fascinated me as a kid” and that he learned to play music just as it was written. He married young, in August 1925, obviously a shotgun wedding since his wife gave birth to a baby daughter, Yvonne Constance, in December.

While working in New York in 1927, Kirby met the great trombonist Jimmy Harrison who persuaded him to switch to tuba. Kirby gigged with such groups as the Bill Brown, Charlie Sheets and John C. Sheets bands before joining Fletcher Henderson as a tuba player in 1929. After Henderson disbanded in 1934, Kirby continued to find work in New York both in night clubs and on record dates (including one notable session with Billie Holiday). Kirby prudently saved as much money as he could from these jobs and thus, in 1937, was able to form his own little band at the Onyx Club in New York. Initially, the band included trumpeter Frank Newton and alto saxist Pete Brown, fine musicians but rather too individualistic and extroverted for what Kirby had in mind.

What he had in mind was a group in which the lead voices—trumpet, clarinet and alto sax—would play intricate lines either in unison or in three-part harmony, and in which the rhythm section would be quieter and less obtrusive than in most contemporary jazz bands. To this end he replaced Brown with alto saxist Russell Procope (1908-1981), a veteran reed player who had been gigging around New York for years, recording with Jelly Roll Morton and playing with Billy Freeman, Benny Carter, Chick Webb and Henderson. But his trumpet replacement was even more sensational, 18-year-old Charlie Shavers (1920-1971), a phenomenal virtuoso who could play rings around most “swing” trumpeters of his time as well as improvise in a blistering, fast-paced style that was an influence on Dizzy Gillespie.

Suddenly, Kirby found himself with a band so popular on 52nd Street that people started coming from miles around to hear him. He was so popular, in fact, that the club’s owner even paid them to rehearse! Kirby was briefly married to pop-jazz singer Maxine Sullivan, and the two of them produced a surprise smash hit with their jazz rendition of Loch Lomond (arranged by pianist Claude Thornhill). They also landed a recording contract with Brunswick, then with Vocalion, and finally with Columbia Records where they produced a string of hits, including Opus Five, The Turf, Jumpin’ in the Pump Room and the first recording of Shavers’ hit composition, Undecided. They were not the first jazz band to perform in formal dress—Duke Ellington beat them to the punch on that—but their natty onstage appearance greatly enhanced their commercial success.

And therein lies the crux of the matter, their style, and their treatment by posterity. Had the Kirby Sextet’s intricate arrangements, which by the way appealed greatly to other musicians—Jelly Roll Morton, when he heard them in New York in 1939, became a huge fan—stayed within that fraternity, I’m sure that they would have been fêted down through the decades and lamented as unsung heroes who pioneered a remarkable new style of jazz that was at least a decade ahead of its time. But they had the misfortune to become media darlings of the time, praised and admired under the title “The biggest little band in the land,” and in conjunction with this Columbia encouraged them to record an almost endless string of uptempo jump tunes, assuming that this was the only facet of their style that appeared to people and therefore would be the only kind that would sell. Because of this, in the view of several jazz critics, the Kirby Sextet was simply a highly proficient entertainment unit. Gunther Schuller, in his book The Swing Era, demeaned them as a band that played simply for people’s amusement that “dried up and blew away,” and the annotator for the Smithsonian’s 2-LP reissue of Kirby recordings went even further, accusing them of “race treason.” To understand the mentality behind the latter comment is to understand the underlying, inherent racism of some so-called liberals’ view of jazz artists. In their mind, music played by black musicians has to be funky, down and dirty, bluesy, hot and heavy, etc. etc. etc. If it’s refined, dignified, even slightly introverted—all of which the Kirby band’s jazz was—it has to be counter to the principles of black culture.

Since this is not a blog on sociology, I will refrain from delving into this topic too deeply, but you really should check your own priorities and prejudices before accusing a serious black musician whose goal was something different, something that was not “outright jamming,” as an expression of musical principles as being guilty of race treason. So Kirby, Shavers, Procope et. al. were denying their blackness by playing music with tremendous intricacy (and, often, very tongue-in-cheek humor) instead of blowing their brains out? The annotator for the Smithsonian LP had high praise for the alternate (rejected) take of their Columbia recording of Sweet Georgia Brown, even though the highly intricate opening chorus (which sounds like a classical musician’s improvisation on the chords of the song) was played sloppily and out of synch, because the solos were “bursting with excitement.” True, they were; and in the issued take, the solos are indeed a shade tamer; but as a complete aesthetic experience, there is no comparison between them. Equally, critics of this ilk bitterly complained of their swing arrangements of classical themes. Opus Five, one of their big hits, was taken from Chopin (though if you compare it to the original Op. 5 of Chopin, you’ll find that they did a remarkable job of transformation), and there were also Bounce of the Sugar Plum Fairy, Mr. Haydn Gets Hip, By the Waters of Minnetonka and others. Yet perhaps one of their most remarkable transformations was that of Thomas Griselle’s lovely little Nocturne, which they played with consummate artistry.

Another facet of the Kirby band’s oeuvre that is rarely discussed was their repertoire of Mediterranean-tinged tunes. Early on there was Dusk on the Desert; later, the gifted jazz composer-arranger Lou Singer wrote several others for them, including Tunisian Trail. Pieces like these brought an entirely new sound color to jazz, a timbre even more exotic than that which Juan Tizol brought to the Ellington band through his Caravan and Pyramid. And then there were their modernized revampings of old “Dixieland” tunes like Original Dixieland One-Step and Royal Garden Blues, which the band turned on their ear with extraordinary arrangements that completely rewrote these pieces. And yes, the individual solos in these and many other recordings—best of all, for me, is a 1941 performance of Rehearsin’ for a Nervous Breakdown—were not only highly inventive and original in and of themselves, but if you listen carefully you will notice that each soloist picked up where the previous one left off.

By the end of 1941, the first personnel change was made when the wonderfully virtuosic but understated drummer O’Neill Spencer died of tuberculosis, the scourge of early-‘40s jazz. His replacement, Specs Powell, was a good musician but not quite as good as Spencer. But then came World War II, and Procope was drafted for a few years (Shavers was safe because he proved that he was the sole support of his mother). That was when a series of substitutes came into the band, among them George Johnson on alto sax. Around 1944 the 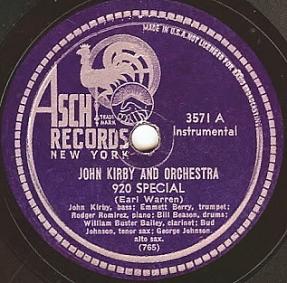 sextet quietly expanded to a septet with the addition of none other than Ben Webster on tenor sax, later replaced himself by Budd Johnson. Many critics have complained that the group’s “delicate balance” was thus disturbed and that they weren’t the same, but truthfully, until 1946 when the band lost no less than three of its major stars—Shavers, who joined Tommy Dorsey, Procope who joined Duke Ellington, and pianist Billy Kyle, who jumped to Louis Armstrong’s All-Stars (Powell also left, replaced by Bill Beason)—yet they still sounded pretty good. Several of the recordings issued on the two-LP Inner City album, The Biggest Little Band in the Land, were in fact made with the expanded wartime group with George Johnson on alto, Webster on tenor and Powell on drums (Shavers on trumpet), and there is very little discernible loss in musical quality.

Kirby’s error was in not updating his sound after the war. By then, not only bebop, the new sensation in jazz, but also the progressive swing style of Boyd Raeburn, Stan Kenton and Woody Herman, were exerting a strong influence on both jazz and popular music, with the whole scene blown up with the arrival of Dizzy Gillespie’s big band in 1946. The Kirby Sextet, with its light, fleet aesthetic, could easily have moved into that style just as tenor

saxist Coleman Hawkins did, but Kirby stubbornly stuck to his old style and was thus deemed outdated. The ensuing loss of jobs led to depression and heavy drinking, which eventually led to Kirby’s early death at the age of 43. It was a stunning loss to jazz, though by the time he died both Kirby and his band had been kicked to the curb—a real pity.

The Kirby sextet certainly deserves to have their place in jazz history restored. I still recall the time I was a guest on Oscar Treadwell’s jazz radio show and played Kirby’s recording of Royal Garden Blues. The look of utter delight on Treadwell’s face, particularly when Shavers pulled the mute off his trumpet and blasted a Dizzy Gillespie-like solo out of thin air, said it all. This was a band to be reckoned with, not ridiculed and marginalized. I urge you to explore the Kirby Sextet’s music. The more you hear, the more you’ll fall in love with them.